By ‘eck, it was ridiculous how good that team was!

Shortly after Ajax’s golden generation had slogged their way to a 1-0 win over AC Milan in the 1995 Champions League Final, the latter sent the former a rather classy fax to congratulate them on their victory.

For the record, the ‘Frankie’ being referred to is Frank Rijkaard, who had returned to see out his career with boyhood club Ajax in 1993 after five incredibly successful years at Milan. 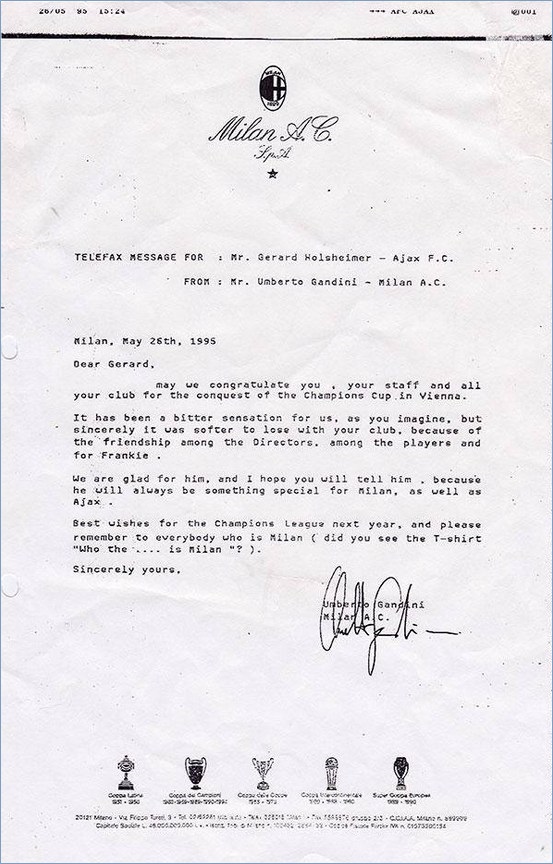 Here’s the fax in full…

May we congratulate you, your staff and all your club for the conquest of the Champions Cup in Vienna.

It has been a bitter sensation for us, as you imagine, but sincerely it was softer to lose with your club, because of the friendship between the directors, among the players and for Frankie.

We are glad for him, and I hope you will tell him because he will always be something special for Milan, as well as Ajax.

Best wishes for the Champions League next year, and please remember to everybody who is Milan (did you see the t-shirt “Who the **** is Milan”?).

The t-shirt in question… 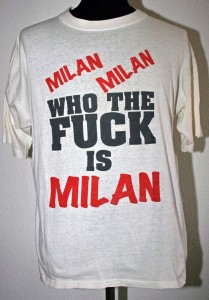 There’s an accompanying song too, set to the immortal strains of ‘Living Next Door To Alice’ by Bradford’s finest, Smokie…