Manchester City’s Euro-woes look like continuing for another season after the Citizens went down 2-1 at home to Juventus on Tuesday night. 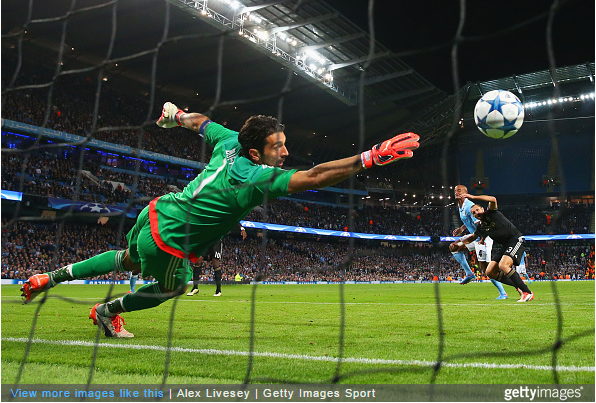 With Sergio Aguero on the bench after recovering from injury, Wilfried Bony started up front for the hosts.

However, it was £49million man Raheem Sterling who had a great chance early on to open the scoring, only for the former Liverpool star to shoot straight at Gigi Buffon in the Juve goal.

Juventus were impressive throughout, with Paul Pogba superb in midfield and Chelsea loanee Juan Cuadrado impressing on the flanks.

The opening goal eventually came just before the hour-mark, when Giorgio Chiellini headed into his own net, albeit after some (unpunished) manhandling from Vincent Kompany.

Azzurri legend Buffon then produced an outstanding double save from Sterling and then David Silva, in what proved to be a pivotal episode in the game.

On 70 minutes, the visitors got the goal they deserved, with Mario Mandzukic netting after a superb pass from Pogba.

Then, with Kompany off injured, Alvaro Morata stole a yard on sub Nicolas Otamendi before curling home past Joe Hart.

City boss Manuel Pellegrini sent on Aguero but it was too late for the Citizens who saw their faultless start to the new season hit the buffers.

It may be only one game, but the warning signs are there again for City who’ll need to find a new way of playing in Europe if they are to finally blossom on the big stage.