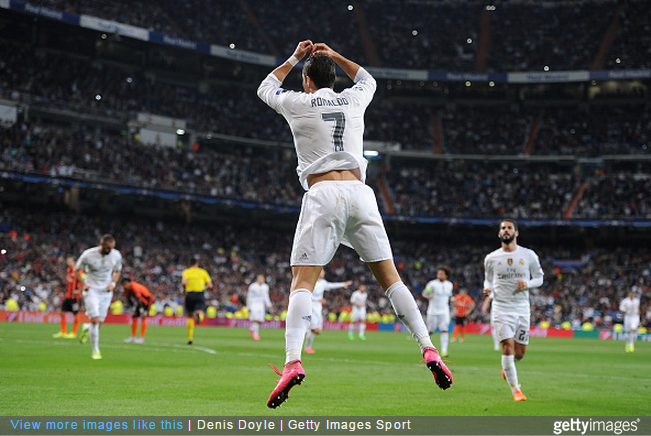 It seems that never a game goes by when Cristiano Ronaldo doesn’t manage to send at least one record toppling, and last night’s Champions League run-out against Shakhtar Donetsk was no exception.

Real Madrid cruised their way to a 4-0 victory at the Bernabeu, with Ronaldo helping himself to yet another hat-trick – his eighth goal in the space of two games and his 33rd hat-trick for Los Blancos.

Now for the records we promised you. Firstly, Ronaldo’s triptych of goals against Shakhtar saw him become the first player ever to score 80 goals in the Champions League (Lionel Messi is lagging far behind on a mere 77!).

Shakhtar Donetsk are the 29th opponents Ronaldo has bagged against in the Champions League. Only former Real Madrid striker Raul has scored against more different teams, with 33.

With two of his three goals coming from the spot, Ronaldo moved on to 11 successfully converted ‘normal time’ penalties (i.e, excluding shoot-outs) which takes him out in front of Luis Figo (with 10) in the grand scheme.

It was also Ronaldo’s third ever Champions League hat-trick, moving him level with Mario Gomez, Filippo Inzaghi and Luiz Adriano. Only Messi has more to his name, with five.

All in all, not a bad night’s work.