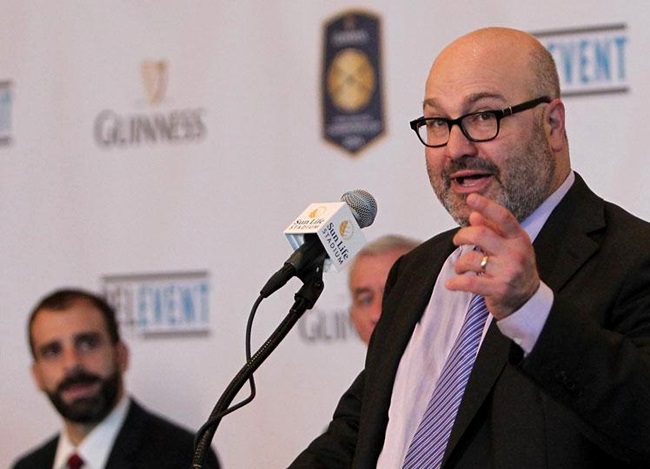 Charlie Stillitano (right) is a man on a shitty, shitty mission

Earlier this very week, we were told that high-ranking officials from five of the Premier League’s biggest cash cows met at a super secret location (the Dorchester Hotel on Park Lane, Mayfair, London) to discuss potentially forming some sort of axis-of-evil breakaway Super League with an American billionaire.

It later emerged that Ed Woodward, Bruce Buck, Ivan Gazidis, Ferran Soriano and Ian Ayre actually met up with Charlie Stillitano, the US sports mogul behind the creation of the International Champions Cup – little more than a glorified, monetised pre-season tournament.

The topic of conversation was exclusivity. Money and exclusivity. You see, Stillitano is trying to ring-fence football in order to protect the business interests of the game’s major franchises, i.e, the clubs he’s heard of.

In short; if you love football, you should despise him and everything he is. Our friend Charlie wants to “re-structure” the Champions League to prevent the likes of Leicester City, PSV and Ghent sullying it with their lacklustre global brand potential.

Speaking to US satellite radio station SiriusXM, Stillitano outlined his plans while simultaneously displaying a fundamental absence of understanding of his supposed field of expertise:

What would Manchester United argue: did we create soccer or did Leicester create it?

Let’s call it the money pot created by soccer and the fandom around the world. Who has had more of an integral role, Manchester United or Leicester?

Stillitano’s understanding of football is that of a capitalist playground. A sham-meritocracy with a cut-off point. Uppity oiks like Leicester are an enjoyably kitsch anomaly, but not to be taken seriously going forward.

[Leicester’s ascent] is a wonderful, wonderful story – but you could see it from Manchester United’s point of view, too.

Maybe it is absolutely spectacular unless you are a Manchester United fan, Liverpool fan … or a Chelsea fan.

I guess they don’t have a birthright to be in it every year but it’s the age-old argument: US sports franchises versus what they have in Europe.

He just doesn’t get it. He can’t see it from any other perspective than a money-making exercise. Sounds very NFL-ish to us.

He’s a sports mogul, for crying out loud. How can he have such a cack-handed grasp of the underlying principles of competitive sport? The highs, the lows, the fallow years, the meteoric rises. The human endeavour.

This is going to sound arrogant and it’s the furthest thing from it … but suddenly when you see the teams we have this summer in the ICC you are going to shake your head and say, ‘Isn’t that the Champions League?’”

No, the Champions League is PSV and Ghent.