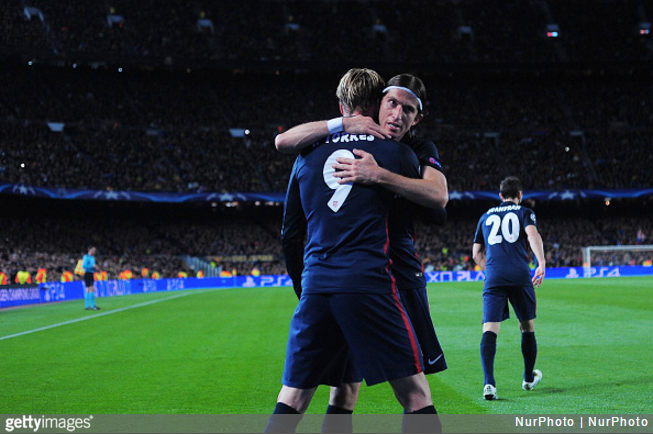 “Don’t worry Nando, it’ll all be over soon…”

Just as they did in La Liga back in January, Atletico Madrid went a goal up at the Camp Nou, had a man sent off and then proceeded to lose 2-1 to Barcelona in the first leg of the Champions League quarter-finals last night.

The result rubbed several of the Atleti camp raw, with jilted trio Fernando Torres (who scored the opener before getting himself dismissed shortly thereafter), Filipe Luis and Diego Simeone all lining up to mither about Barca and the perceived favour they receive from the Champions League higher-ups.

There were a few undoubtedly questionable decisions made by referee Felix Brych on the night, with Barca’s two-goal saviour Luis Suarez receiving zero comeuppance for a frustrated swipe at Atleti right-back Juanfran in the first half before Torres picked up his second yellow for what amounted to no more than a clumsy stumble.

How the fck didn’t Suarez get a straight red for this blatant kick???
Not even a caution?!#FCBAtleti pic.twitter.com/9OdRQdfXgn

Luis led the barracking after the final whistle, letting loose with an unguarded anti-UEFA barrage in his post-match interview that is almost certainly going to land him in hot water.

They protect Barca. There is a worry that they’re going to get knocked out. I don’t know what [a Barca player] has to do to get sent off.

It was a totally unfair red card, [Torres’] second foul and his second yellow. We knew that was going to happen, Barcelona in the Champions League. We have to play against everybody and everything.

Simeone was quick to echo his left-back’s sentiments, though just about managed to refrain from actually accusing UEFA of corporate favouritism.

I can’t say what I want … I need to think about what I’m saying so I don’t say anything I shouldn’t.

Beyond the inequality there was in the match, we leave with a situation that allows us to have hope.

Finally, Torres reserved his judgement for an interview with radio station Cadena Cope in which the striker griped about his sending-off:

With eleven men we would have won without any doubt.

UEFA worry about making us change shirts, but they didn’t appoint a referee that is up to the level of the Champions League quarter-finals.

Yeesh, don’t they know that footballer’s aren’t supposed to show any human emotion of any kind these days?

Atletico can probably expect three little envelopes from UEFA waiting for them on their doormat before the end of the week.