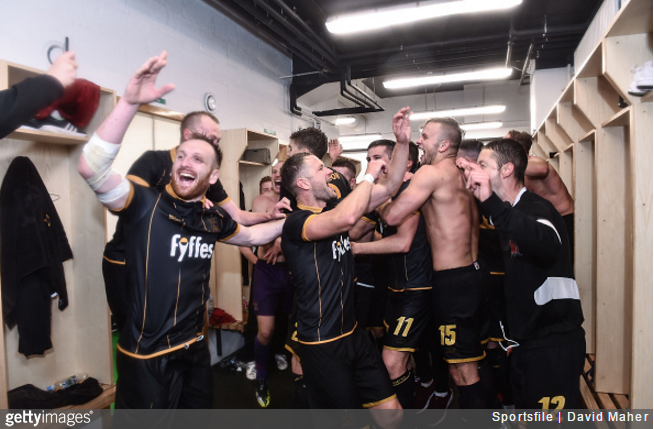 Dundalk made history last night by becoming the first League of Ireland side to make it into the Champions League play-off rounds.

A herculean effort saw Dundalk overturn a 0-1 first-leg deficit to beat BATE Borisov 3-0 in Tallaght and 3-1 on aggregate, thus ensuring the Irish side at least one more Champions League fixture this season which, even if they lose, would see them wind up in the Europa League group stages.

The result also secured a nice little €5.4m UEFA windfall too, which is always nice.

Two goals from David McMillan and a late third from midfielder Robbie Benson did the damage, as BATE crumbled on the night.

Not even the late introduction of Alexander Hleb could save the Belarussians, as Dundalk stormed to victory…

It’s the best feeling I have had in football and the lads feel the same. We know that we have eight more games at least in Europe and that will go a long way.

We’re not content with the Europa League we want to make the Champions League. It’s great for everyone, to be able to do it with this group of lads is an incredible feeling.

Funnily enough, the Tallaght Stadium (which is ordinarily home to Shamrock Rovers) doesn’t actually meet UEFA requirements for the next round of the Champions League, which means that Dundalk may well have to play their subsequent game at the 51,000-seater Aviva Stadium in Dublin.

On last night’s evidence, we’re sure they’ll have no problem filling it!