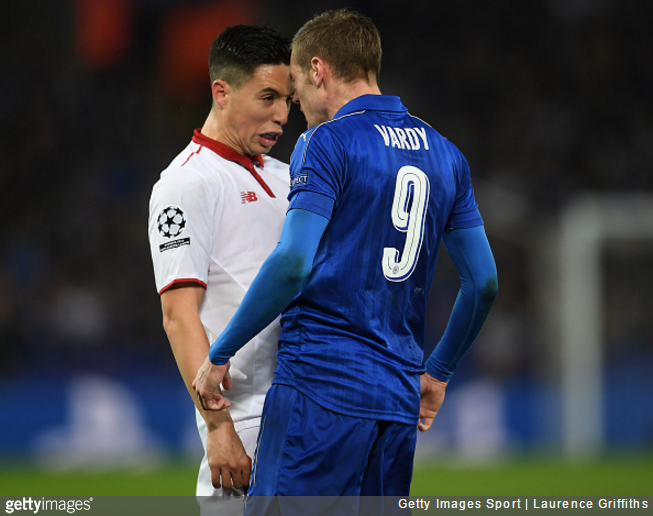 Samir Nasri has flat-out accused Jamie Vardy of cheating after the Sevilla midfielder was sent off for attempting an unsolicited mind-meld with the Leicester City striker during Tuesday night’s Champions League clash.

Both players were shown yellow cards after the intense static discharge caused by rubbing their foreheads together caused Vardy to half-topple backwards.

Unfortunately for Nasri, it was his second caution of the match, thus he wound up watching the remainder of the game on his own in the tunnel like a naughty child…

As I was approaching my interview-position. I met this man. Nasri. Watching the last minutes on a TV in the tunnel pic.twitter.com/shTYFddTbn

Speaking in the cold light of day, Nasri was left fuming by the whole sorry ordeal:

For me he (Vardy) is a cheat because if he was a foreign player you, the English press, would be saying he’s a cheat.

Vardy then exercised his right to reply by lying through his teeth:

I’m not a cheat and I never have been. That’s all I’ve got to say on the matter.

A spokesman for Leicester then added:

The club refutes entirely any allegation that questions the professional integrity of Jamie or any of its players.

For the record, Jamie Vardy is a cheat. He cheats all the time.

In fact, there is quite a lot of irrefutable footage that shows him cheating on a nigh-on weekly basis.