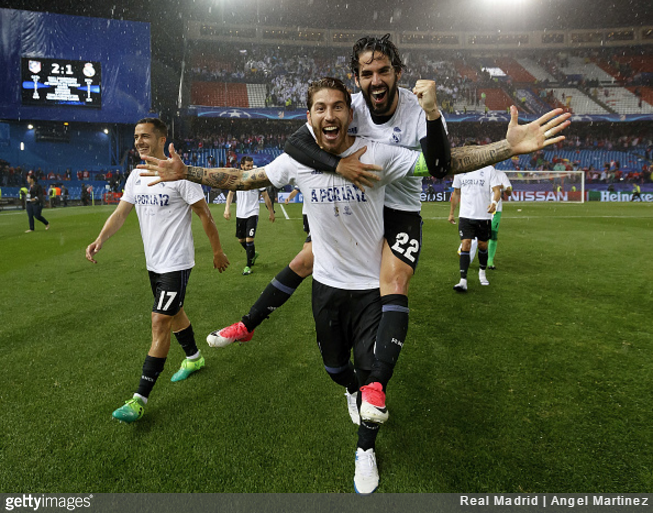 A single goal from Isco was enough to put Real Madrid beyond the reach of Atletico and, ultimately, into yet another Champions League final.

Atleti made a typically aggressive start and duly ignited hopes of a comeback as early as the 12th minute, when Saul Niguez connected with a corner to send the home side 1-0 up on the night…

All of a sudden it was game on inside the Vincente Calderon, with the aggregate score now 2-3.

However, just as quickly as they’d come coursing out of the blocks, Diego Simeone’s side almost immediately began to ease off again as their cross-city rivals began to wrest back a foothold.

Indeed, just a few minutes from half-time, a sublime bit of touchline wrigglesmanship saw Karim Benzema snake his way past three defenders before playing in Isco, who stabbed home a vital, dynamic-shifting away goal…

Suddenly needing three goals again, Atletico began to wilt as Real enjoyed the majority of the possession in the early knockings of the second half with Luka Modric and Toni Kroos beginning to pull the strings in the middle of the park.

Sergio Ramos was also at his imperious best as the skipper made a series of surgical interceptions, snuffed out danger at source, kept his backline tight and generally led by example.

That said, it took a fine double save from Keylor Navas to deny Yannick Carrasco and Kevin Gameiro from finding their respective ways onto the score sheet as the 65th minute ebbed away…

As the game ebbed away, it became increasingly clear that all the damage had been done in the first leg, with Real more than equipped to ride out the final stages.

And so, as an almost biblical rain storm lashed down on Arganzuela, the final whistle sounded to confirm that the rich boys from across town would be marching on into their sixth Champions League final.

The Duodecima is on, though Juventus are likely to prove a much sterner test come that fateful evening in Cardiff.

That’s got to be a tough one to take.