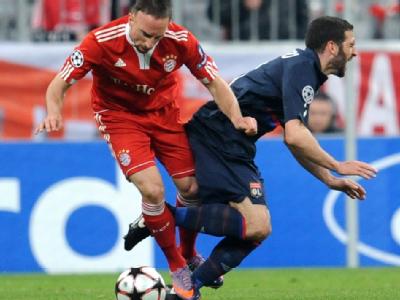 Bayern Munich winger Franck Ribery has seen his appeal to overturn his Champions League suspension rejected by UEFA – meaning he will now almost definitely miss the final of the competition on May 22nd.

Ribery received a straight red card following a pretty appalling challenge on Lisandro Lopez (see above) during the first leg of Bayern’s Champions League semi-final clash with Lyon, which resulted in landing him with a three-game ban from the competition.

The German side were hoping to reduce the sentence to a one-game ban by appeal, which would allow Ribery to participate in the final as the Frenchman had already sat out the return leg of the semi-final.

But UEFA rejected the plea, leaving Ribery facing the possibility of watching the final from the stands. However, Bayern chairman Karl-Heinz Rummenigge has indicated (via the club’s official website) that the Bundesliga giants will now lodge an appeal with the Court of Arbitration for Sport (CAS);

“In my opinion, both Franck Ribery and our legal representative Dr Gerlinger convincingly illustrated that this was not violent conduct, but rather merely foul play.

In this case, the appeals body accepted it was a borderline case. However, the three-member tribunal has unfortunately not accepted Bayern’s plea.

We are very disappointed with the verdict and still cannot comprehend why this foul has been adjudged violent conduct.

Immediately after the verdict was announced, we informed UEFA that we would exercise our right to appeal (to CAS) against the second verdict.

We will continue our fight for a fair verdict, so that Franck Ribery can play in the Champions League final despite the suspension being upheld today.”