Lionel Messi passed yet another career milestone on Wednesday evening when he scored his 100th goal in European competition, thus becoming the first ever player to do so for one single club.

The goal came in Barcelona’s 3-1 win over Olympiakos, in which Messi netted the second goal with a set-piece on the hour mark.

In all honesty, the free-kick itself was hardly vintage, with goalkeeper Silvio Proto hardly covering himself in glory as Messi’s relatively tame effort slimed off his wet gloves and underneath the crossbar…

As mentioned, the goal was Messi’s 100th in European football with Barca, though only 97 of those have come in the Champions League, with three being scored in the UEFA Super Cup.

That means we can expect to hear the exact same hoo-ha when he brings up his Champions League century in three goals’ time. That said, Cristiano Ronaldo is currently perched on 95 Champions League goals for Real Madrid, so the race is most definitely on.

Anyway, it would also appear that Messi relied on a little of what The Byrds once dubbed “artificial energy”, after retrieving a mysterious pill from his sock before swiftly going on to break his record… 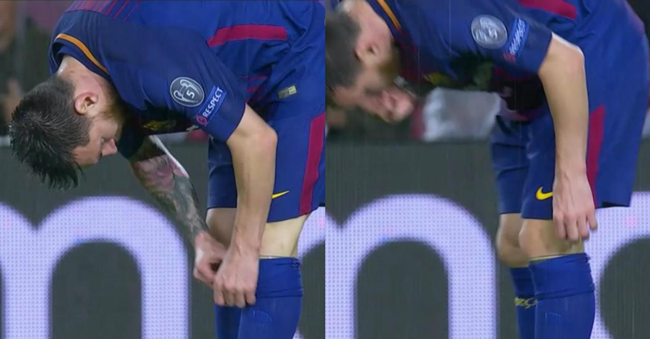 Thankfully, Catalunya Radio commentator Ricard Torquemada has already assured us that Messi was simply chewing on a glucose tablet for some extra chutzpah.