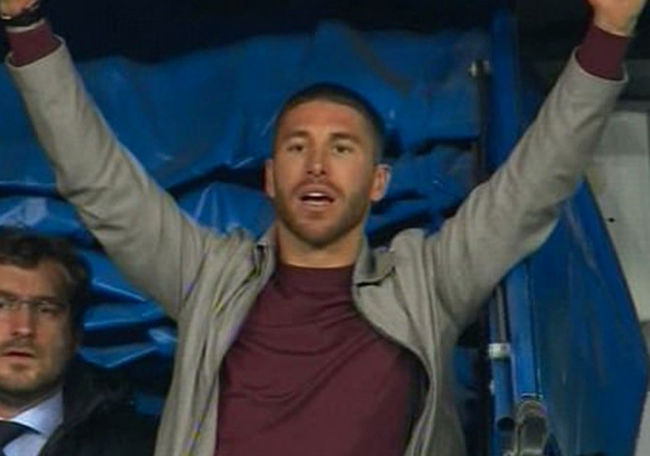 Ramos was forced to sit out of last night’s quarter-final duel against Juventus through suspension and, despite not setting foot on the pitch, it looks like the perma-banned defender may have still managed to incur yet another disciplinary sanction.

The 32-year-old began the night watching the match from high in the Bernabeu stands but moved to watch the final few frantic minutes from inside the tunnel.

Sergio Ramos could be suspended for the first leg of the semi-final after watching the final minutes of the Juventus match from the tunnel.https://t.co/x1HprGYmRf pic.twitter.com/hFnLGgpTwH

When Real’s penalty was given in stoppage time, the match was delayed for a few minutes as tempers frayed, during which time Ramos was shown in heated conversation with Juve coach Massimiliano Allegri.

Speaking after the final whistle, Allegri confirmed the general topic of discussion between the pair:

Ramos said the penalty was “claro” [clear] and I told him: “Not so claro, let’s say grey.

However, the fact that Ramos was able to converse with the Juve dugout is the crux of the matter here. According to AS, Ramos’ decision to move to the tunnel contravened the conditions of his suspension, which was duly noted by the UEFA match delegate.

Let’s face it, if anybody can get themselves banned without playing, it’s Sergio Ramos. Getting suspended while already being suspended is a special feat. It’s suspenception.

There is precedent too, with UEFA stinging Xabi Alonso (who was playing for Real at the time) for encroaching onto the pitch during the 2014 Champions League final against Atletico Madrid by banning him from the subsequent Super Cup.