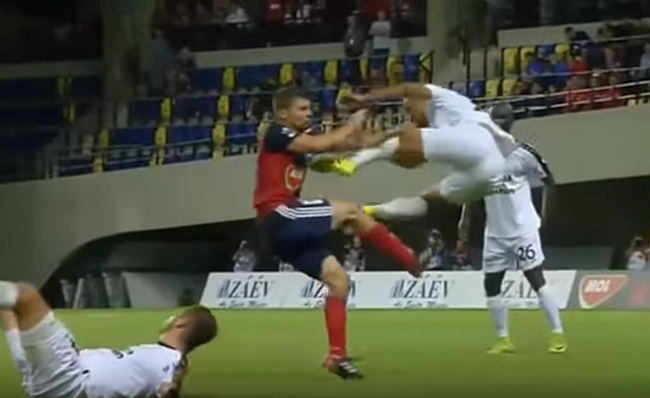 What with the World Cup and all that malarkey, there’s every chance you didn’t notice that the 2018/19 Champions League kicked off four weeks ago.

As such, with most clubs the continent over still mired in pre-season training, little ol’ F91 Dudelange of Luxembourg may have already provided the filthiest ‘tackle’ of the new season.

Dudelange travelled to Hungary to play MOL Vidi FC (formerly Videoton) in the first qualfying round earlier this week and, while losing 2-1, they also finished the match with ten men thanks to a truly horrific finale from defender Bryan Melisse.

With the last minute of the match ticking away and tempers flared, Melisse felled Vidi midfielder Mate Patkai with the kind of airborne double-footed drop kick that would make Nigel de Jong wince…

So there you have it. That’s certainly going to take some beating in the ‘worst tackle of the season’ stakes and we’re not ever properly off the mark yet.