After enduring what you might politely describe as a ‘torrid’ start to his Barcelona career, summer signing Malcom finally notched his first goal for the club in Tuesday night’s 1-1 draw against Inter Milan – his Champions League debut.

The Brazilian snubbed Roma to sign for Barca in a €41million transfer in July, but has since found his involvement severely limited with just one Copa del Rey start to speak of.

Indeed, rumours of a January escape attempt have been rife over the past few weeks amid claims that the 21-year-old is “mentally depressed” over his situation.

As such, there were cathartic scenes when, just two minutes after coming on against Inter, Malcom put a stylish finish to a counter-attack manoeuvre that began deep inside Barca’s own penalty area…

Unfortunately, Mauro Icardi went and cancelled Malcom’s goal out within 120 seconds of the restart, but that didn’t stop the Spanish press from hailing the ex-Bordeaux winger’s input. 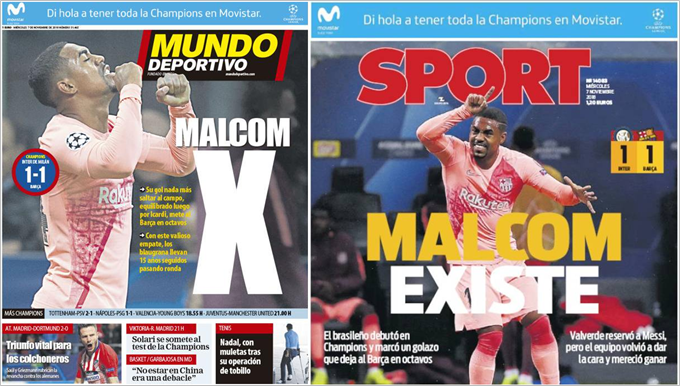 The result leaves Barca perched atop Group B with 10 points from four games, with Inter tucked in behind them on seven points.

Over in the group’s other tie, Tottenham fought back to beat PSV to take their tally to four points, thus preserving their slim chances of squeezing through to the knockout phase with difficult games against Inter and Barca to come.