Diego Simeone enjoyed Atletico Madrid’s scrap against Juventus in the Champions League on Wednesday night, with the dogged Argentinian once again emerging from a big game with a win and a clean sheet to boast.

After Alvaro Morata saw a goal chalked off by VAR, it eventually took 78 minutes for the breakthrough to come as Jose Gimenez opened the scoring for Atleti.

This prompted Simeone to turn to the fans behind his dugout and clutch his plums in defiance.

Diego Godin went onto add a second goal for Atleti in the 83rd minute which left Cristiano Ronaldo positively fuming and Juve needing to score at least twice in the return leg in Turin next month.

Speaking after the game, Simeone was quick to semi-apologise for his gesture:

It’s not a nice gesture, I admit, but I felt the need to do it.

I did it in a Lazio-Bologna game (as a player). I wanted to say to our fans that we have coglioni.

I can only apologise if anyone was offended. It wasn’t aimed at the other team, I was turning towards our own supporters.

Not nice, no – but thoroughly entertaining in a ‘total bastard’ kind of way. 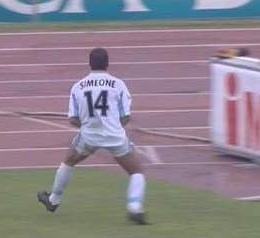 Pretty much Simeone in a nutshell, if you’ll excuse the pun.