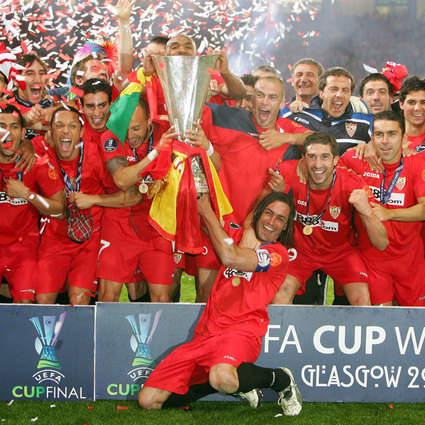 The UEFA Cup is set to undergo a dreaded re-branding in a bid to raise the competition’s profile, according to Bayern Munich chief Karl-Heinz Rummenigge. The ex-German international is the chairman of the new European Club Association, a 15-man board which has replaced the defunct G14. (Incidentally, Chelsea’s Peter Kenyon and Liverpool’s Rick Parry are also part of the ECA.)
Rummenigge said: “I believe we have to change the branding in order to increase the prize money and make the competition more interesting for the participating clubs.”

Rummenigge continued: “Everyone has always had the impression that the UEFA Cup is a second-class competition and we have to do more to make it more like it was 15 or 20 years ago in terms of importance.”
Yes, but the reason the Uefa Cup was more important 15 or 20 years ago is because there was no Champions League then. So Uefa have caused this problem themselves.
There’s no doubt that the Uefa Cup suffers by comparison with the Champions League, but in mirroring the CL’s format, surely the Uefa Cup – or Europa League, as it’s set to be renamed this September – will lose much of its identity. What we’ll end up with is a second-class Champions League, featuring a lower standard of football. I guess for fans of the clubs that might compete in such a league, European silverware is European silverware, by any name.
Still, good riddance to the G-14 monopoly.