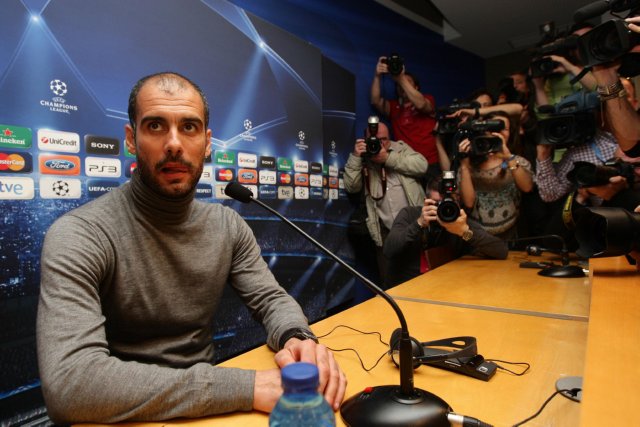 Has he cracked? From the outside looking in, it seems as though Pep Guardiola may just have let Jose Mourinho’s barbs and burrs start to get under his skin – especially if his reaction at last night’s pre-‘Champions League semi-final Clasico’ presser was anything to go by.

Earlier in the day, Mourinho accused his Barca counterpart of being the founding member of a one-man group that criticises referees when they make good decisions – referring to Pedro’s disallowed goal in the Copa del Rey final being chalked off for offside.

This all came after Mourinho, upon finding out that German Wolfgang Stark was to officiate, leapt upon Pep’s assumption that the Real coach would be ‘super happy’ if UEFA appointed a Portuguese ref as originally planned.

For those who aren’t fluent in the Catalan vernacular:

“Wednesday at 8.45pm we will meet each other on the pitch. Off the pitch he has already won.

“In this (press room), he’s the f**king chief, the f**king man, the person who knows everything about the world and I don’t want to compete with him at all.

“It’s a type of game I’m not going to play because I don’t know how.

“I won’t justify my words. I congratulated Madrid for the cup that they won deservedly on the pitch and against a team that I represent and of which I feel very proud.”

“Off the pitch, he has already won, as he has done all year. On the pitch, we’ll see what happens.”

“If you think that his allegation that I always complain about the referees is true after you’ve all heard form me over the last three years, well there’s nothing I can do. Off the pitch there’s nothing we can do to fight that.”

“Do you think the players will run more because I’ve spoken to Jose through the cameras? It’s the Champions League semi-finals. The players won’t be motivated by this, they know what I think about everything associated with this game.”