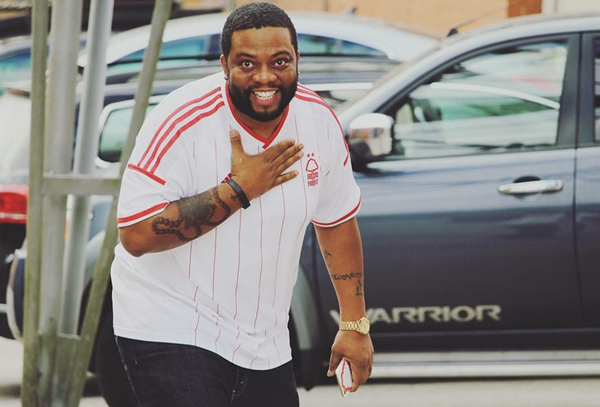 Big Wes gets his first look at the City Ground (Photo: Wesley Hall/Twitter)

The aghast American bloke you see before you is a chap by the name of ‘Big Wes’, who realised his dream of taking in a Nottingham Forest game at the City Ground over the weekend after falling in love with the team quite by accident.

It all began when Forest fans contacted Wes on Twitter (@bigwes) some four year back to congratulate him on playing his 400th game for the club.

As you may have gathered, the messages were actually intended for former Reds centre-half ‘Big Wes’ Morgan, who has since joined Leicester City.

Intrigued by the accidental goodwill he received, Wes began following Forest’s fortunes closely from his home in Atlanta, Georgia.

Despite admittedly knowing nothing about football at the time, Wes’s love for the game has blossomed ever since and he now counts himself as a die-hard Forest fan, becoming something of a Twitter celebrity in the process.

As such, he was invited down to the City Ground as guest of honour for Saturday’s 1-0 defeat against Hull – a fitting introduction to life as a Forest supporter if ever there were!

“I said I wanted to be an honorary Forest fan,” he told BBC Radio Nottingham.

“When I said that, that’s when the whole thing went absolutely wild and it’s been like a rocket ship ever since.”

I spent weeks dreaming about what Nottingham would be like. Being here was FAR better than anything I imagined. Thank you again #nffc. xx

Wes and his mum travelled from Georgia to Nottingham, taking a brief tour around the city before tucking into a good ol’ fashioned fry-up and libations at the Southbank bar to get their matchday experience off to a customary start.

He then arrived at the City Ground, and was overcome by emotion after setting his eyes upon the stadium for the first time.

“I shed a couple of tears walking in,” he said.

“It was overwhelming because ever since this whole thing started it’s been really my desire to get here, to be amongst the people that I’ve grown to love, and now being here is actually a dream come true.”

“It’s been amazing seeing everybody that I’ve been corresponding to online,” Big Wes added.

“It’s been absolute madness, non-stop. I’ve had a blast since I’ve been here.”

We’ve departed Nottingham. What a time the club and the city have shown us. You’ve done yourself proud. Until we meet again. YOU REDS! #nffc

Good lad, though we’re not really sure he’s aware that he’s unwittingly set himself up for a lifetime of abject disappointment.

Oh well, he’ll get used to it soon enough.