Queens Park Rangers have sacked Jimmy Floyd Hasselbaink after the Championship side drew 1-1 with Nottingham Forest on Saturday.

Hasselbaink was given the job at Loftus Road in December last year but has struggled to make a positive impact on QPR, who have since won just 14 of their 47 games under the Dutchman.

The club released the news on their website on Saturday evening… 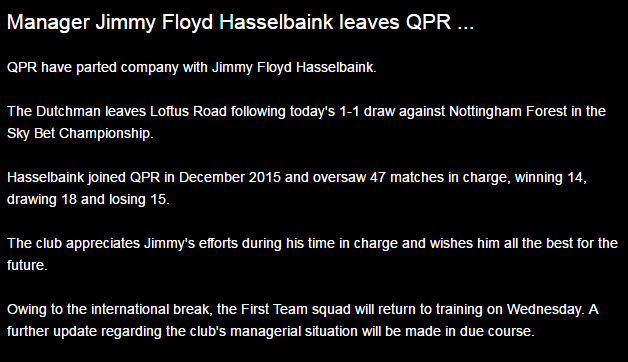 Only last month, the Dutchman found himself embroiled in a Daily Telegraph investigation into corruption in football. But, at the time, QPR stood by their man.

However, after a disappointing run of form, the powers that be at Loftus Road have decided to pull the plug on the former Chelsea star’s reign at the club.

King of the gilet, Tim Sherwood, hasd been linked with QPR before Hasselbaink’s dismissal and is now in the frame to take over at the west London club.