The Metropolitan Police have confirmed that a Middlesbrough fan has been arrested and charged after urinating in the water bottle belonging to QPR goalkeeper Alex Smithies.

A video clip of the fan, stood in the stands directly behind Smithies’ goal at Loftus Road, shows him appear to take a leak into the bottle before chucking it back onto the pitch.

According to the Metro, it was subsequently claimed on a QPR fans’ forum that the bottle was snatched from inside Smithies’ goal during an earlier pitch invasion. 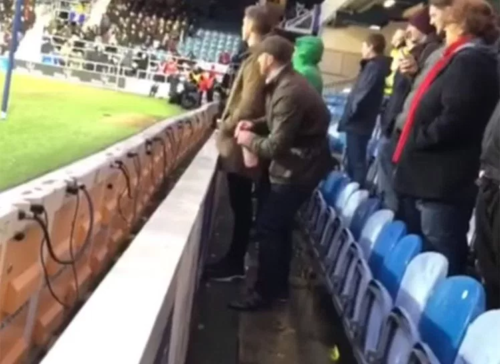 The Met’s football unit later tweeted that the supporter in question has been apprehended and charged with throwing an item onto the pitch:

After an investigation, the MPS Football Unit can confirm that the male arrested at the QPR-Boro game yesterday has been charged with throwing an item on to the pitch.

The male has been bailed and will appear at court next month.

Cleveland Police then followed suit, admonishing the “disgusting act” and adding that they will do all they can to “remove him from attending Boro games again”.

Quite so. Filthy swine.