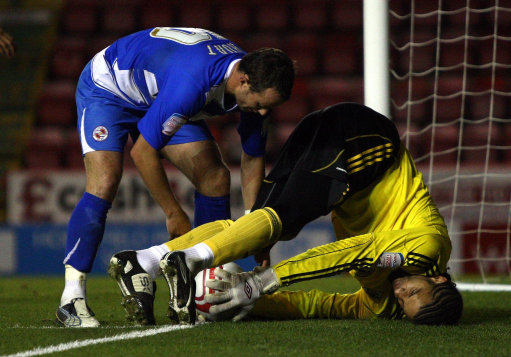 Former England ‘keeper David James has admitted that he may have had a few too many Creme de Menthes when he accepted the call from Steve Coppell to join Bristol City back in late July.

James is quoted in this morning’s Daily Star as saying:

I thought I would either stay with Portsmouth, move to a Premier League club or go to Scotland (with Celtic). In between thinking about all that, there was my wedding to Amanda to organise. Somehow it all converged at a single point.

The morning after (the wedding) I received a phone call from an unknown number. I don’t usually answer those, but I was still drunk and so I picked it up.

Much to my astonishment the man on the other end was Steve Coppell. He said, ‘All right Dave, I’m the Bristol City manager, and was wondering if you’d be interested in having a look at the club?’

If it had been anyone else, I would not have considered it, but such was my respect for Steve that Bristol City became a serious contender.

To put it in some kind of perspective for you, Coppell resigned from his post less than two weeks later and James has since shipped 23 goals in 13 Championship games with a couple of vintage clangers thrown into the mix for good measure. Booze, tssk.