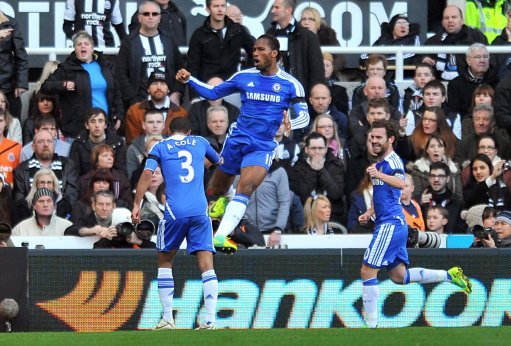 Chelsea eased a little bit more of the pressure on their wiry manager Andre Villas-Boas after putting three past the Magpies at St James’ Park. A revitalised Didier Drogba but the visitors ahead on 38 minutes, heading home from a Juan Mata cross. The opening goal had come after Frankie Lamps had seen his spot-kick saved by Tim Krul.

However, Alan Pardew will no doubt point to referee Mike Dean’s failure to send David Luiz off on four minutes as a crucial moment in the game. The Brazilian defender was adjudged to have brought Demba Ba down just outside the box as the African striker headed for goal, however, despite being the last man, Luiz only received a yellow for his trouble. To be honest, it looked as if both players were fouling each other, but to award the free-kick and then not send off the Chelsea centre-half seemed a bit daft.

After the break, Newcastle pressed but never made the breakthrough, with Shola Ameobi hitting the crossbar. Then, with only a couple of minutes left on the clock, sub Salomon Kalou (a perpetually under-rated player) and Daniel Sturridge netted to seal a vital win for the Blues. Oh, and Sammy Ameobi made yet another pointless, gangly sub appearance for the Magpies while ‘Nando Torres set up Kalou’s goal in his own highly-paid cameo role.