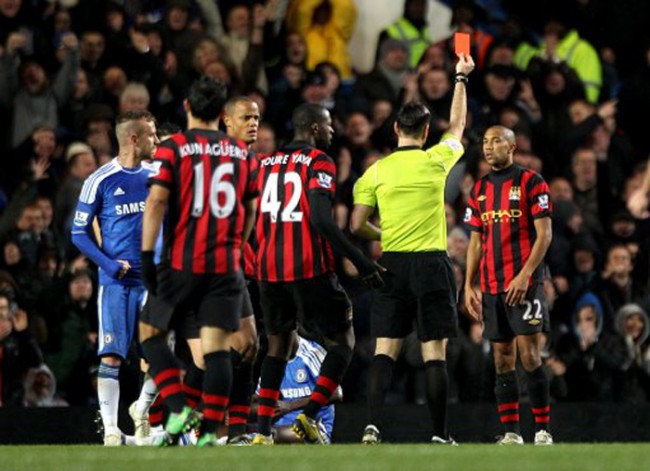 Billed by a number of footballing ‘wits’ as El Cashico and the Oil Firm Derby, this clash of the billionaires’ playthings was always going to be a dramatic affair.

Super/Mad Mario opened the scoring with less than two minutes on the clock, after clever work from Sergio Aguero, but despite being over-run by the visitors for the first half-hour,  Chelsea managed to get back into the game on 34 minutes, courtesy of a  Raul Meireles strike from a Daniel Sturridge cut-back.

Former City-boy Sturridge was giving left-back Gael Clichy a torrid time, with the former Arsenal man resorting to hauling down the fleet-footed striker early in the second-half. The former Arsenal man was booked for that challenge and just before the hour-mark, the Frenchman saw red for another silly challenge, this time on Ramires.

On came Frankie Lamps for the finale and what do you know, after Joleon Lescott handled in the box, the midfielder found the strength in his aged, wizened old legs to blast home the winner from the penalty spot.

So City lose their first league game of the season, and AVB and Chelsea get themselves back into the title race. Oh, and co-commentator Ray Wilkins was forced to apologise on Sky Sports for being too biased towards the Blues. This truly was a game that had it all!

With nine points separating the top five, and everyone apparently capable of beating everyone else, we are surely in for an interesting second-half of the campaign.