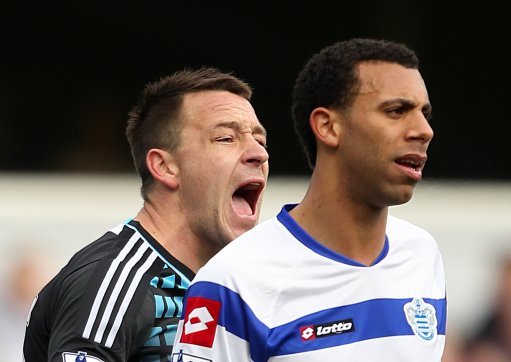 “ANTON!!! I JUST WANT TO TELL YOU THAT YOU HAVE THE MOST BEAUTIFUL NECK!!!”

It can’t have escaped your attention that John Terry is due to stand trial on charges of racial abuse for shouting ‘you know what’ at ‘you know who’ on July 9th, i.e, one convenient week after the Euro 2012 tournament conveniently draws to a close on the first of the month. How convenient.

Anyway, Terry is facing pressure from all sides to hand in his England captaincy at the door and even declare himself unavailable for selection ahead of Polkraine for fear of wading into the tournament with – to use Reading striker, pundit and 5 Live’s go-to black gentleman Jason Roberts’ turn of phrase – a ‘toxic’ atmosphere in the dressing room, a quote used in almost every news report I’ve read today.

Quite why we should be taking Roberts’ word as gospel over anybody else’s is as yet unclear as he isn’t directly involved with the court case in any capacity, nor does he have any experience of the current England dressing room. Or any previous England dressing room for that matter. I think I know why we’re being asked to treat his personal opinion with such veracity, but it’s probably better if I don’t say it out loud. It might be deemed racist.

Several high profile voices have echoed Roberts’ sentiments (Damian Collins MP and Piara Powar, an exec for ‘Football Against Racism in Europe’ to name but two), questioning the morality of allowing Terry to lead England out in Donetsk on June 11th –  though the BBC Sport team have reason to believe that Teflon John will resist the calls for his armband once again, quoting a ‘source close to the player’ as saying: “[Terry] won’t stand down. He is sure of his innocence and thus feels it would be wrong to do so.”

And so, it appears we have reached an impasse.

My verdict? Terry should and almost definitely will remain captain for Euro 2012. He’s a vastly experienced, international calibre centre-half and NOT A LIFE COACH. You want pointers on morality? Ask the Dalai Lama. You want a back-four marshalled to defend a corner against France in the opening game? His Holiness is going to be less than useless. Better get John Terry. The court case and the football are mutually exclusive entities. It’s sometimes easy to forget that.

We know he’s an abhorrent swine, he’s proved that time and time again. I know it, you know it, you can be sure the England pool are aware. The outcome of his latest dalliance with the authorities isn’t going to change that particular universal constant. He’ll be the same abhorrent swine after his trial that he was before. It just so happens that he’s a swine with a useful knack of being able to defend wholeheartedly and command a defensive unit during international football matches – hence his bank balance.

You could quite feasibly argue that Terry shouldn’t be a first-choice centre-half for England given the options available to Fabio Capello and therefore shouldn’t be on the pitch at all – but he will be. That’s almost certain. And there’s no strictly non-football-related reason why he shouldn’t be.

I’d like to make it clear that I’m not condemning or approving anything Terry may or may not have done – just pointing out that, if we’re genuinely adhering to the ‘innocent until proven guilty’ maxim that underlines the nation’s penal system, then there’s no need to impose any counter-productive (be it footballing or otherwise) punishment or sanction on Terry until July 9th.

Until then, he is an innocent man in the eyes of the law, and should be treated as such.