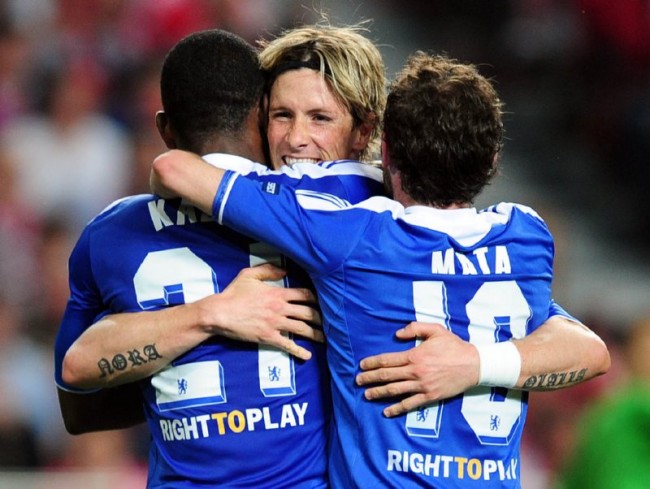 With Frank Lampard, Didier Drogba and Michael Essien on the bench (isn’t that a sackable offence?) Chelsea filed a textbook Champions League 1-0 away-leg victory over Benfica in Lisbon last night, with a clean sheet and an away goal ensuring they’ll be turning out for the ‘second half’ at Stamford Bridge in a week’s time in decent nick.

Roberto Di Matteo admitted he’d made a ‘risky’ call to include Salomon Kalou from he off (presumably as he’s a bit naff) but the spindly Ivorian nabbed the only goal of the game – poking home Fernando Torres’ clipped cross from a couple of yards out with 15 minutes left to play.

Shortly beforehand, Juan Mata came within inches of opening the scoring; scuttling on to Petr Cech’s humongous punt, rounding Benfica keeper Artur only to thunk an acute shot off the outside of the upright.

Apparently, at some point during the evening, Sky Sports reporter and chief supersnitch Geoff Shreeves attempted to rat out Raul Meireles to UEFA for making an ‘obscene gesture’ to the Benfica fans after they gave him their customary ‘ex-Porto player’ welcome:

“I asked UEFA about it at half-time but they didn’t know anything about it, so he may have got away with it.”

Geoff Shreeves: fighting the good fight. What a guy.