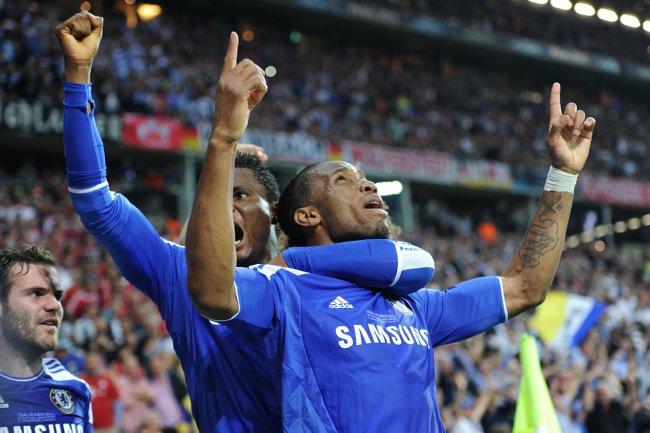 1. If you have a problem, if no one else can help, and if you can find him – maybe you can hire: Didier Drogba. Didier…f**king…Drogba. Nine cup finals, nine goals and a winning penalty in a Champions League final.

2. Petr Cech’s contribution was just as important. Two (possibly three) penalty saves; the first keeping Chelsea in it and then second leaving them teetering on the precipice of glory. Colossal display.

3. Elsewhere Gary ‘John Terry’ Cahill was fantastic and Ashley Cole was ‘one better’ as Nigel Tufnel would have it. Played like a hero. Juan Mata, on the other hand, was noticeably very poor – especially during the first 90 minutes. The onus was on him (at the top of the midfield) to make most of Chelsea’s scarce breaks and he routinely botched his pass/overran the ball and conceded possession. Ditto Toni Kroos on the other side of the divide.

4. That said, the lung-busting shift of the night was definitely put in by Jose Boswinga, who ran himself into the ground to make sure he was front and centre in every picture and photo after the final whistle!

5. Even at the most tense, fraught, distraught moment with fingers latticed over head and tears glistening on face, a football fan will always break kayfabe in order to grin like a gorm once spotting themselves on the big screen. Always.

6. Chelsea opted for the ‘if it ain’t broke, etc, etc…’ tactical approach and sat incredibly deep while riding their luck for the majority of the game. Unadventurous, skittish and, against all probability, effective – for the third time on the spin! While a spectacle it doth maketh not, playing on the back foot from the off takes a lot of discipline and testicular fortitude. Kudos are definitely due.

7. The fact that Chelsea fans rose to applaud their team in at the end of the first half of extra time while the Bayern fans were struck by disconsolate silence probably tells you all you need to know about the two approaches on show.

8. Anatoliy Tymoshchuk looks like the quiet girl in the office that wears cardigans and of whom you have the sneaking suspicion may be a Jehovah’s Witness. Arjen Robben’s default facial expressional is that of a man who has just had wasp fly down behind the lens of his glasses.

9. Bayern’s set-pieces were the square root of shite all evening.

10. He may have scored twentyahundred goals in however many games again this season, but Mario Gomez isn’t nearly as good as his goal record suggests. He’s a bit of a donkey – clumsy, profligate and often dramatically so. Also, Gomez’s failure to score a brace tonight means that Lionel Messi became the first player in the history of the European Cup/Champions League to finish top scorer for four seasons on the bounce. As with most things, all roads lead to Messi.

11. John Terry lifting the trophy in a ‘RIGHT TO PLAY’ shirt? The ironing is delicious.