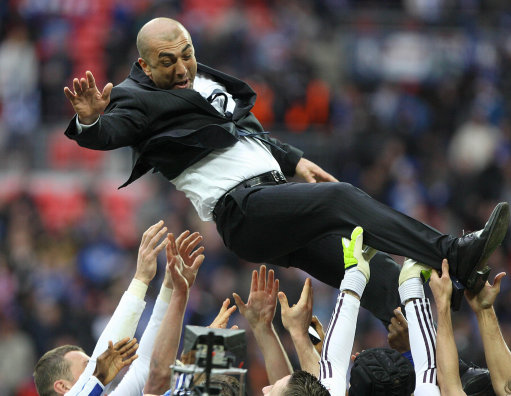 As special thanks for winning the one trophy he’d been chasing for years, Roman Abramovich woke up this morning and decided to sack Roberto Di Matteo after last night’s 0-3 Champions League defeat against Juventus having signed him up to a fresh two-year deal in June having won the FA Cup and the Biggie as an interim.

It’s pay-off time again at Chelsea! Bookies up and down the country just saved a shed load on paying out over Mark Hughes being the first Premier League manager to get the can.

“The team’s recent performances and results have not been good enough and the owner and the Board felt that a change was necessary now to keep the club moving in the right direction as we head into a vitally important part of the season.

“The owner and the Board would like to thank Roberto for all he has done for the club since taking over in March. Roberto helped guide us to an historic Champions League victory and a seventh FA Cup. We will never forget the huge contribution he has made to this club’s history and he will always be welcome at Stamford Bridge.”

So, Chelsea are now looking for their ninth manager in Abramovich’s nine years at Stamford Bridge. Rumour has it that the Russian overlord is now once again flirting with the idea of bringing in good ol’ Rafa Benitez, though Pep Guardiola’s name is also being tossed around this morning.

Pah. It’s not even funny any more. All we can confidently glean from his latest panicky axe-wielding is that Roman Abramovich is a bit of a silly sod.