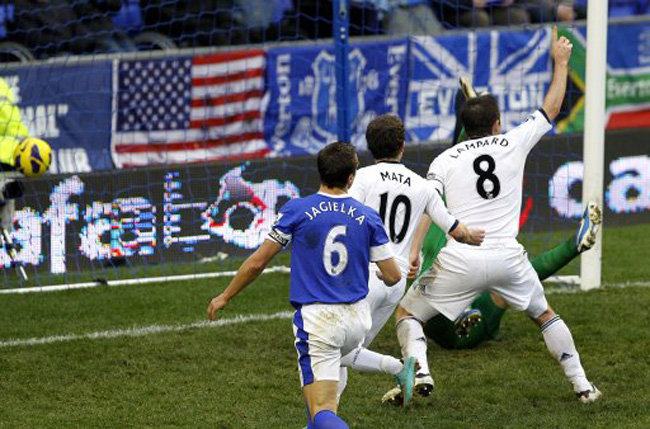 Blues’ legend Frankie Lamps served the powers that be at Stamford bridge a timely reminder of his goal-scoring talents as the midfielder, who looks unlikely to stay with Chelsea after this season, bagged a vital brace at Goodison Park.

The Toffees had made the perfect start on Sunday afternoon, with Steven Pienaar firing home after just two minutes of play and the home side looked comfortable for large portions of the first period. However, with the game heading towards the interval, Lampard struck to level the scores, heading home from a Ramires cross.

After the break, Rafa Benitez’s men pushed for the winner and were eventually rewarded when Lampard volleyed home after good work from the superb Juan Mata.

Nikica Jelavic, currently in the midst of a dry spell, had a chance to secure a share of the spoils for the Toffees late on, but failed to make contact with the ball, and that as that.

The win sees Chelsea move to within four points of second place Man City, with a game in hand, while Everton are now sixth.