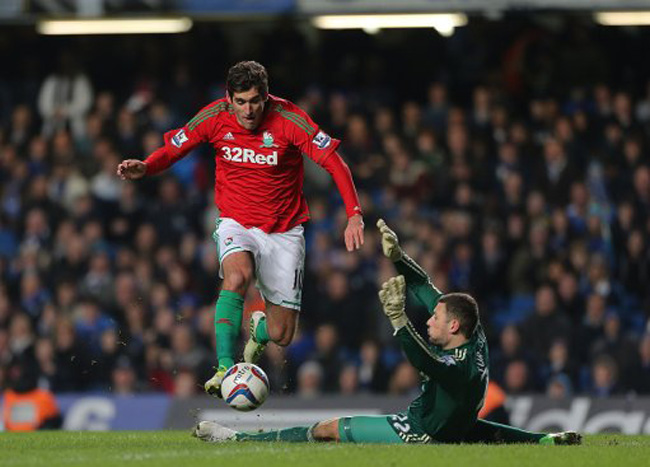 Two errors from the usually dependable Branislav Ivanovic helped Swansea to a shock 2-0 win at Stamford Bridge on Wednesday night, a win that moves Michael Laudrup’s side closer to a cup final appearance.

Rafa Benitez started with Fernando Torres in attack and Demba Ba on the bench, but it was Swansea’s very own goal-machine Michu who opened the scoring on 39 minutes. The Spaniard made the most of a right balls-up from a dawdling Ivanovic before firing home past Ross Turnball. That goal had come against the run of play as the Blues had dominated the first period without finding their way past Gerhard Tremmel in the Swans’ goal.

After the break, the home side pushed for an equaliser, only for the superb Tremmel to thwart David Luiz courtesy of a superb save. Benitez brought on Frankie Lamps and then Ba, followed by Marko Marin, but it would be the Swans who would score next. Ivanovic was one again the villain of the piece for Chelsea, with his appalling back-pass pounced on by Danny Graham who sealed the win for the visitors.

Swansea v Bradford in the Capital One Cup final? It just might happen!