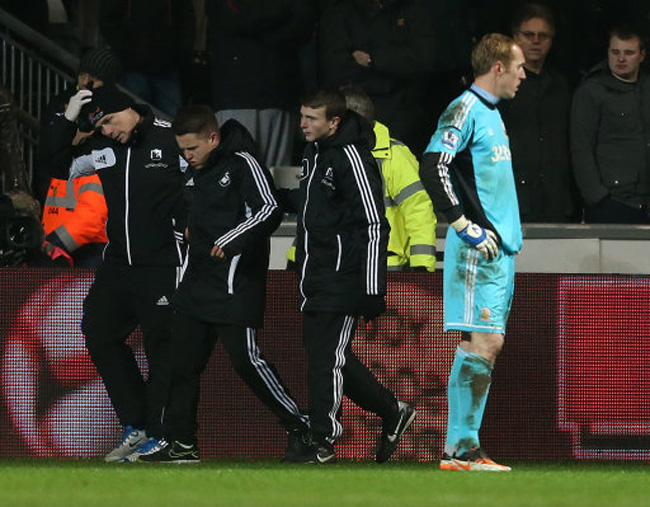 The  already infamous  moment of sheer unadulterated madness from Eden Hazard (see here) where football seemed to finally jump the shark, was a rather apt and rancid cherry atop Chelsea’s cake of turgid mediocrity on Wednesday night.

Travelling to the Liberty Stadium two goals down, Rafa Benitez’s men needed to produce a Class-A performance if they were to reach the Capital One Cup final to play giant-slayers Bradford. However, instead, the west Londoners would finish the night on a downer as they failed to make their possession count against Michael Laudrup’s hard-working Swansea side.

Gerhard Tremmel was the busier of the two goalkeepers in the first period while Spanish full-back Angel Rangel was forced to make a goal-line clearance from Gary Cahill. Although to be fair, the Swans did occasionally threaten the Blues’ goal, with Dutch nation team new-boy Jonathan De Guzman and Micu both going close.

After the break, the Blues pushed for a goal but as their frustration grew, wideman Eden Hazard lost the plot, kicking a ballboy who, admittedly, had been somewhat  slow to give the Belgian the ball back. Hazard rightly saw red and ultimately, it was the Swans who secured an aggregate victory.

What a night of football! And the birth of a new footballing uber-meme!