One of the very first known photographs of Stamford Bridge, taken during Chelsea’s Division Two match against West Bromwich in 1905 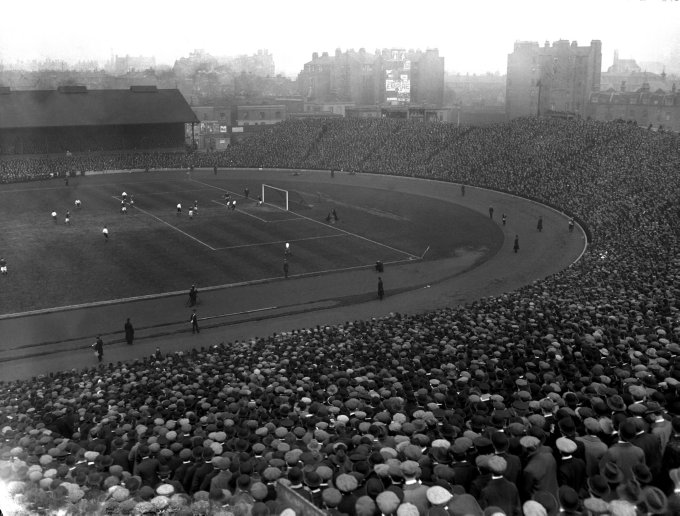 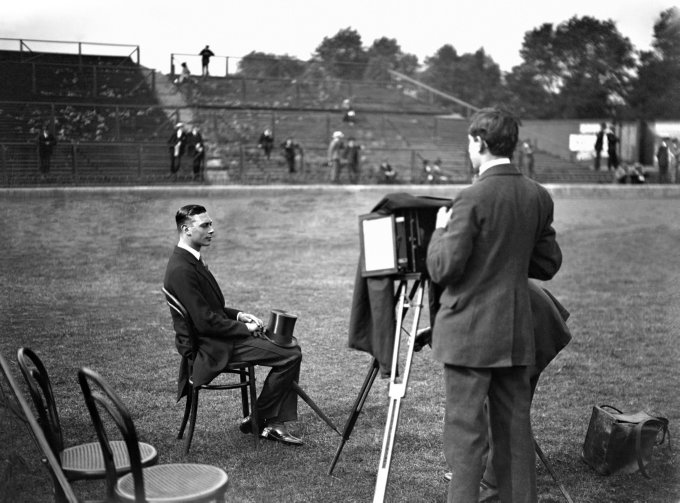 Prince Albert poses for a photograph on the pitch at Stamford Bridge, 1920 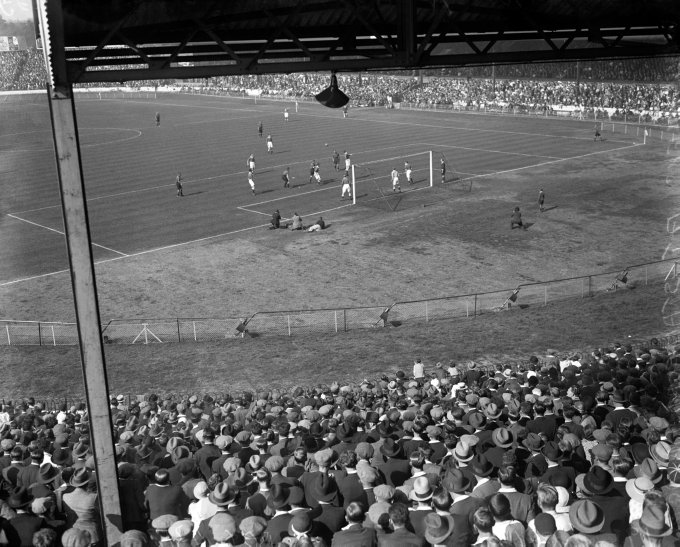 The view from the top of the terrace as Chelsea attempt to keep Wolves at bay, 1933 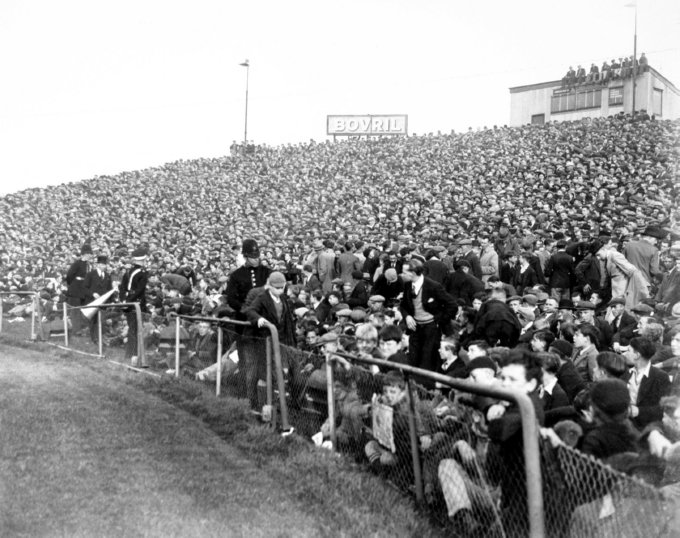 82,000 people cram into Stamford Bridge to watch the derby game between Chelsea and Arsenal, 1935 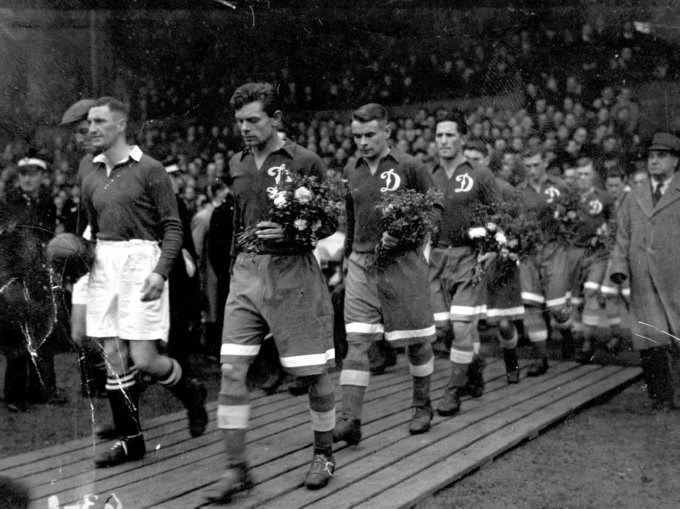 Dynamo Moscow players emerge from the tunnel holding bouquets of flowers (which were later exchanged with the British players) before an exhibition game against Chelsea at Stamford Bridge designed to pay tribute to the Russian factory workers who aided the allied war effort, 1945 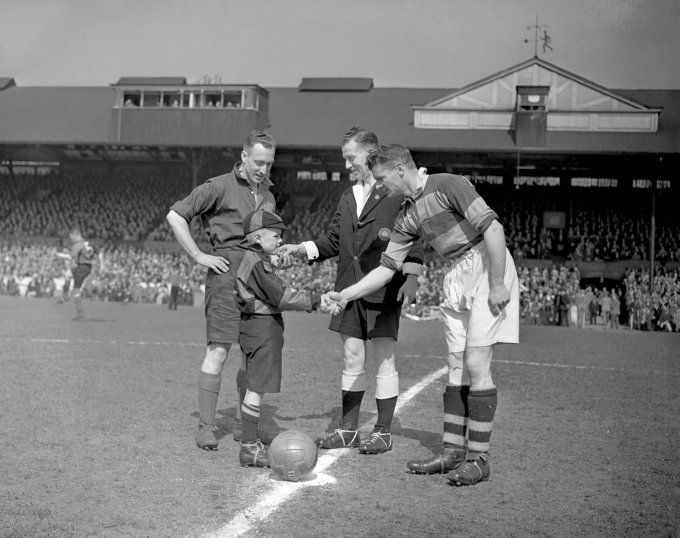 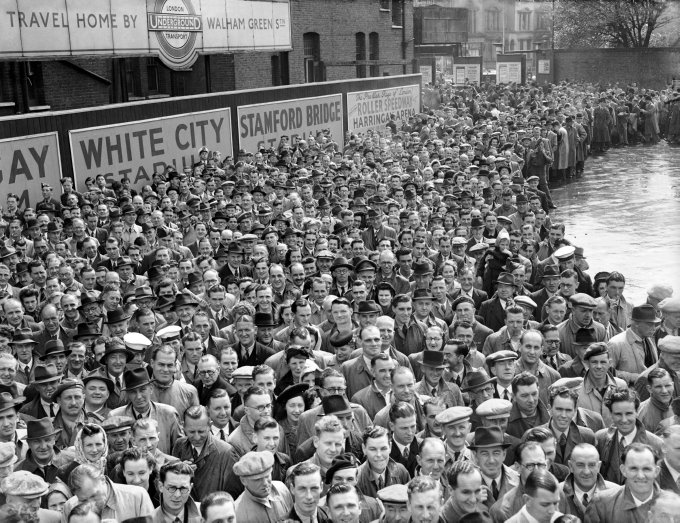 With the Football League restarting for the first time in seven years due to the Second World War, especially large crowds are drawn out for Chelsea’s first league match against Bolton, 1946 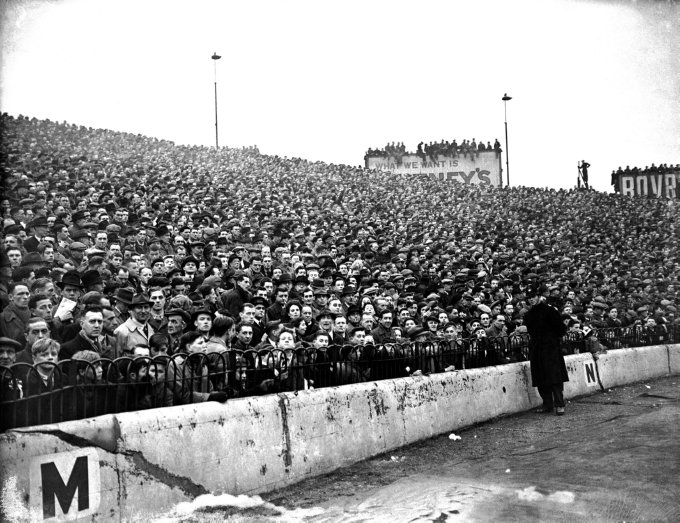 Around 70,000 people huddle together for warmth as they watch Chelsea’s FA Cup Third Round tie against Arsenal amid freezing temperatures, 1947 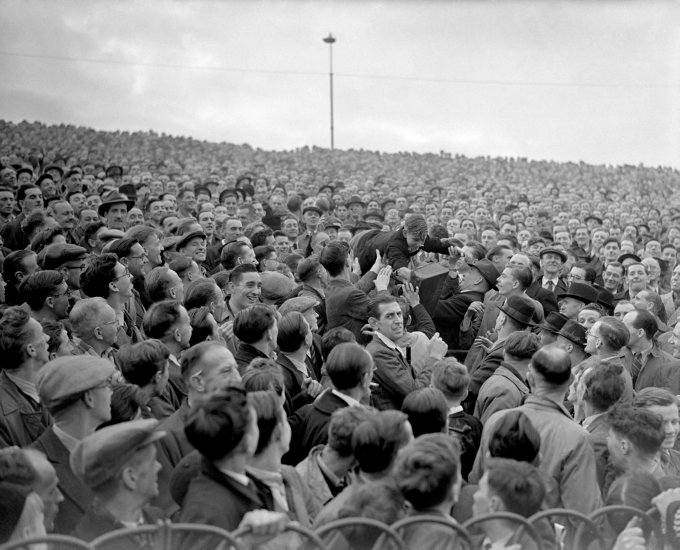 A young Chelsea fan is passed over the crowd to the front of the terrace for a better view ahead of a game against Arsenal at Stamford Bridge, 1947 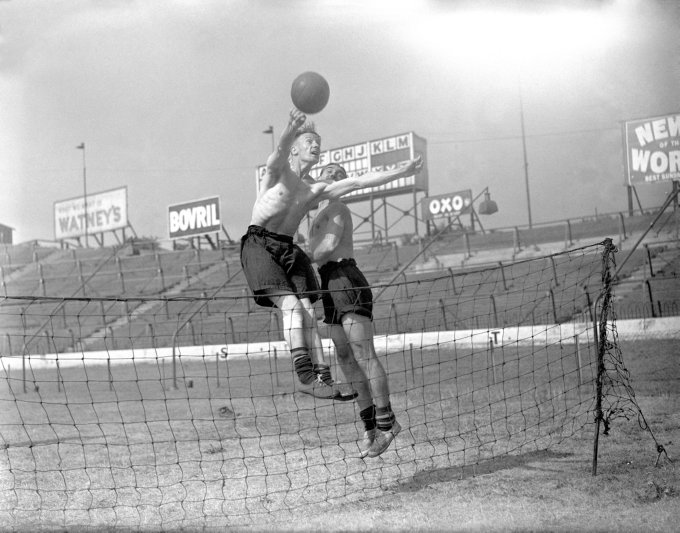 Chelsea’s Dick Spence (left) and Len Goulden (right) engage in a spot of head tennis during a training session at Stamford Bridge, 1947 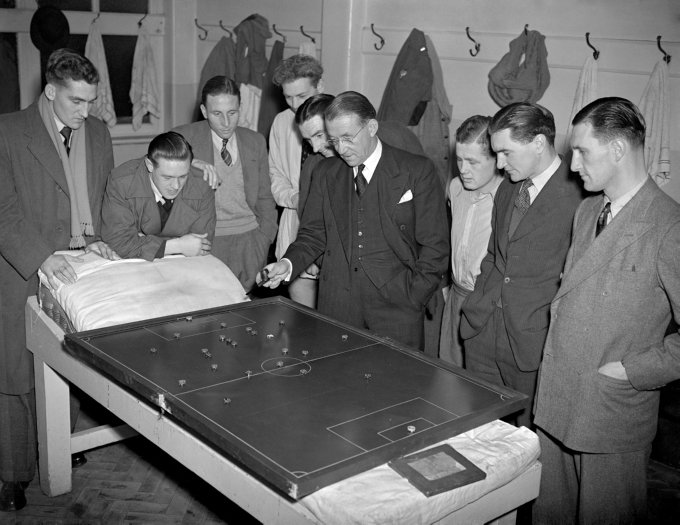 Chelsea manager Billy Birrell gives a tactical talk to his players using an impromptu tactics board in the Stamford Bridge changing rooms, 1950 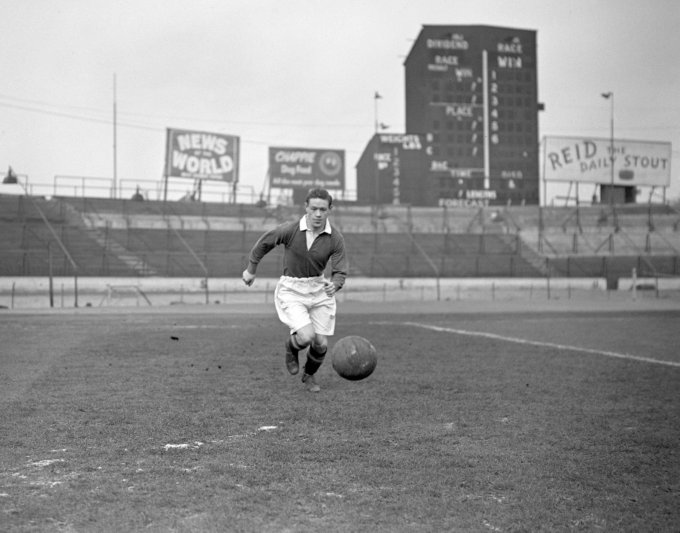 Chelsea outside right Billy Gray chases down a loose ball in front of the empty terraces at Stamford Bridge, 1950 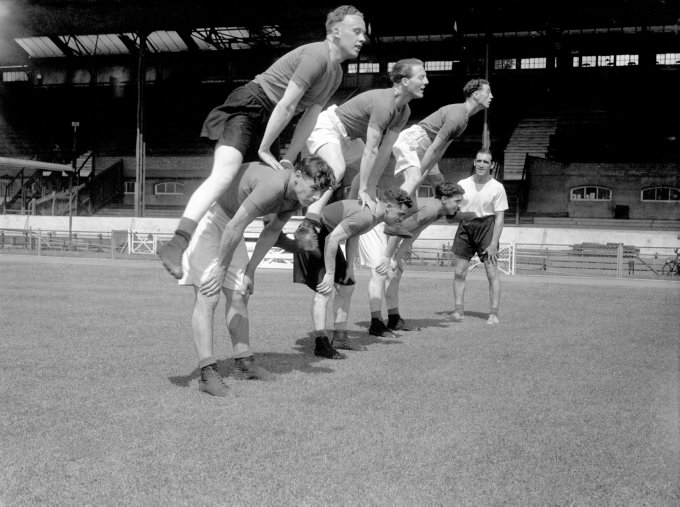 Chelsea players leapfrog in tandem at a pre-season training session, 1950 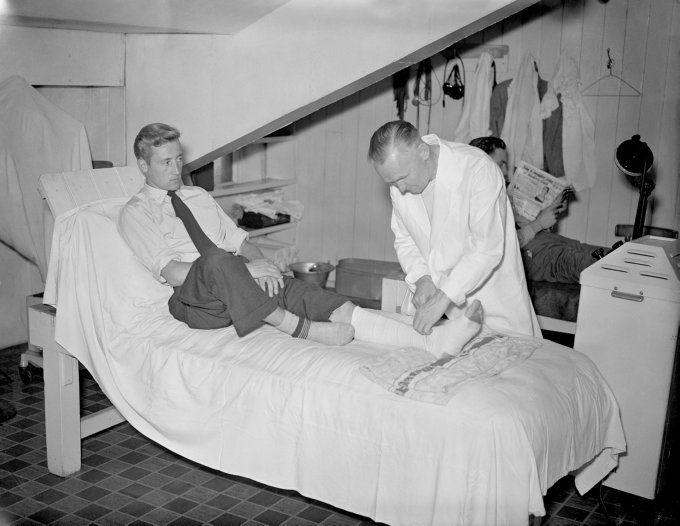 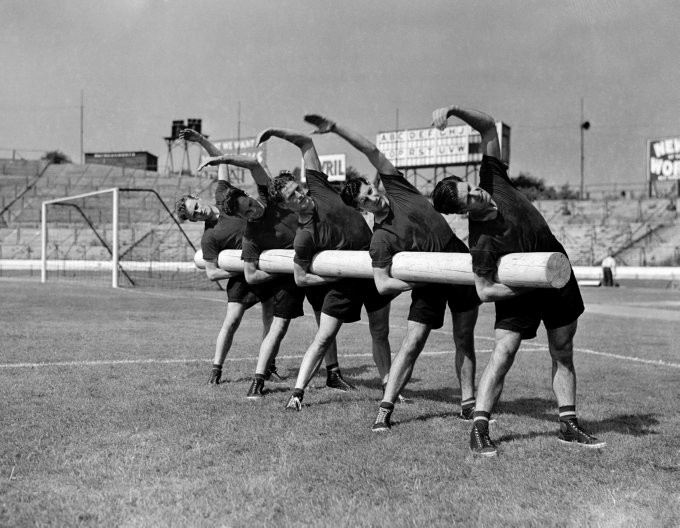 Chelsea players limber (or should that be “lumber”?) up using a 125lbs tree log to stretch off during a pre-season training session, 1953 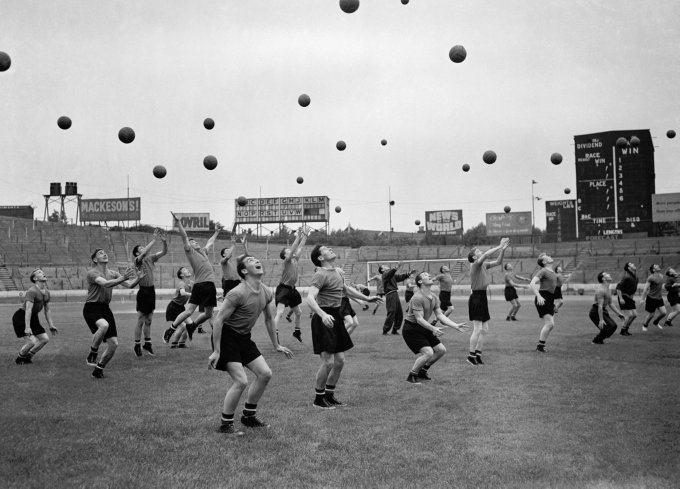 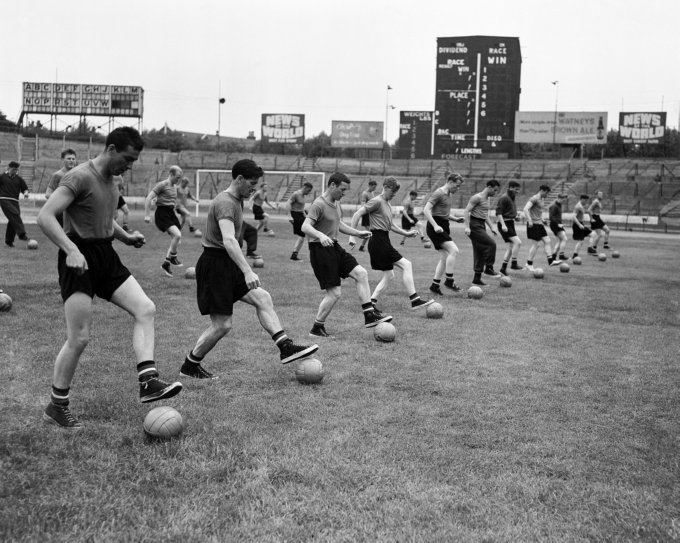 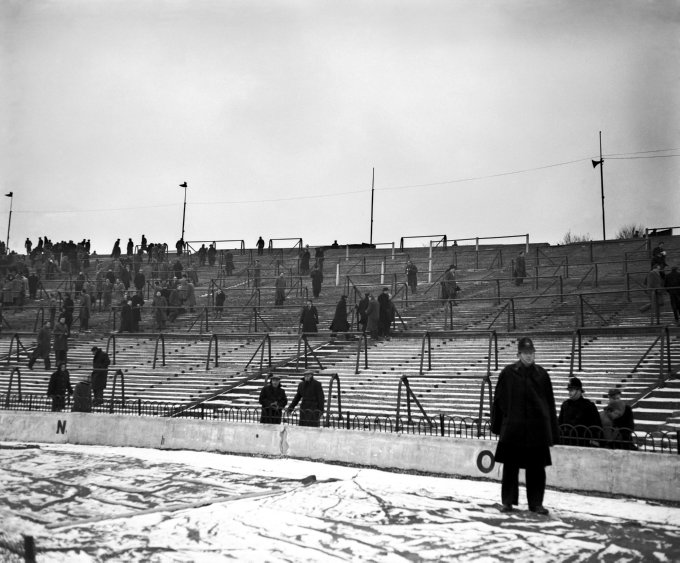 An understandably sparse crowd turn out to watch Chelsea take on Charlton at a snowbound Stamford Bridge, 1956 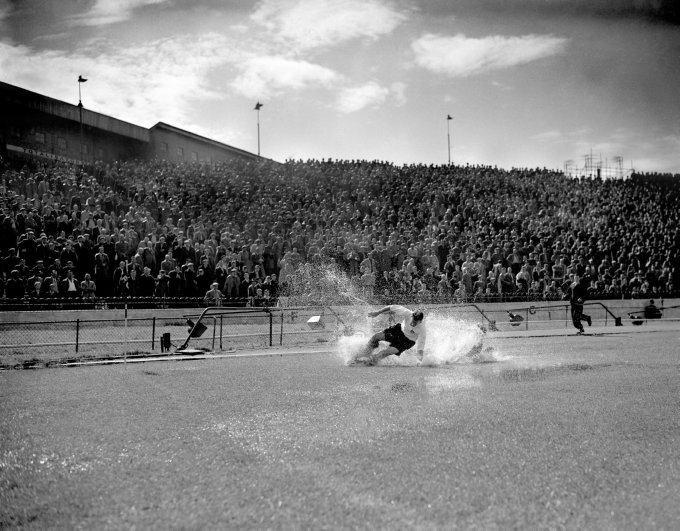 Preston’s Tom Finney creates a splash at Stamford Bridge, completely obscuring Chelsea defender Wally Bellet in what has become one of the most iconic footballing photos ever taken, 1956. The image was immortalised in bronze outside the old National Football Museum in Preston, though the museum has since moved to Manchester. 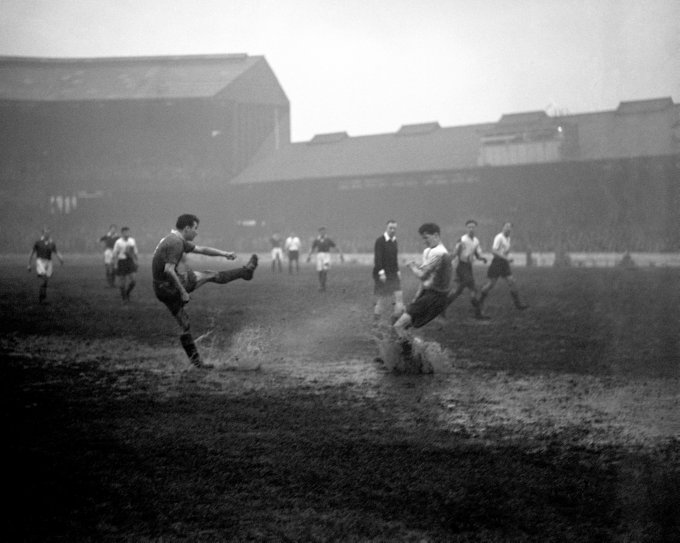 Chelsea’s Peter Brabrook flicks a boot-load of mud into Bolton defender Ralph Gubbins’ face as the two teams play on a quagmire of a pitch at Stamford Bridge, 1957 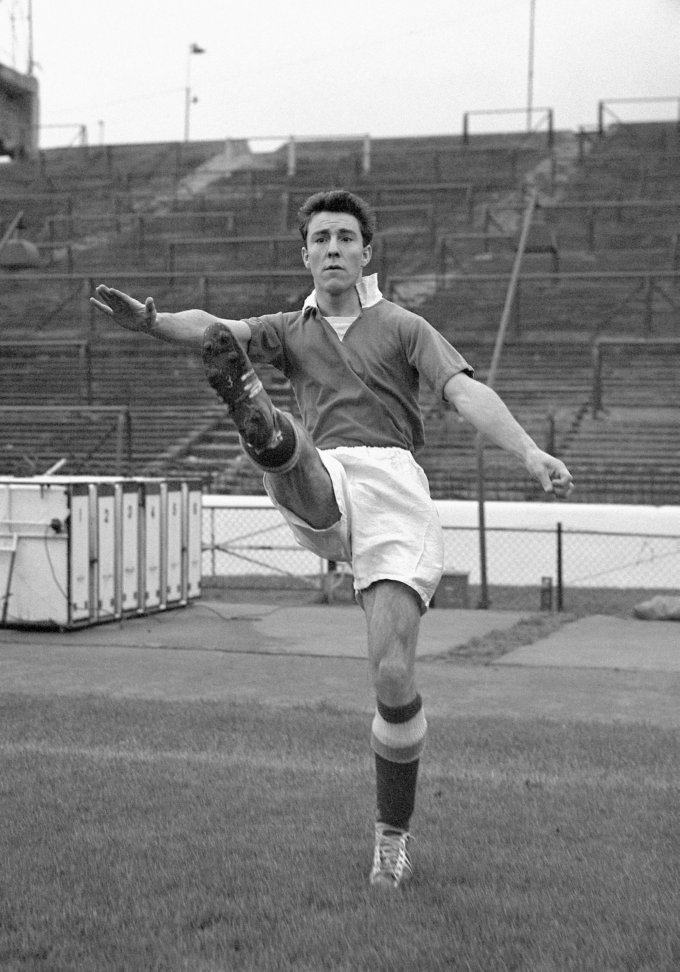 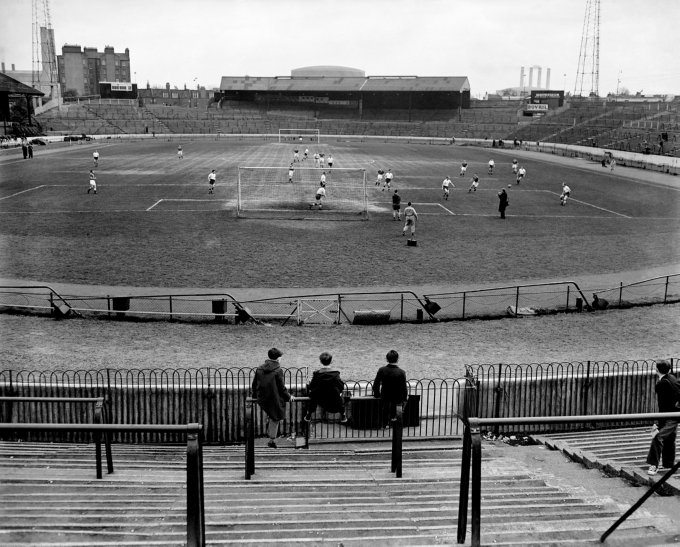 Three schoolboys watch England train at Stamford Bridge ahead of a game against Scotland the following day which attracted a crowd of 100,000 people, 1957 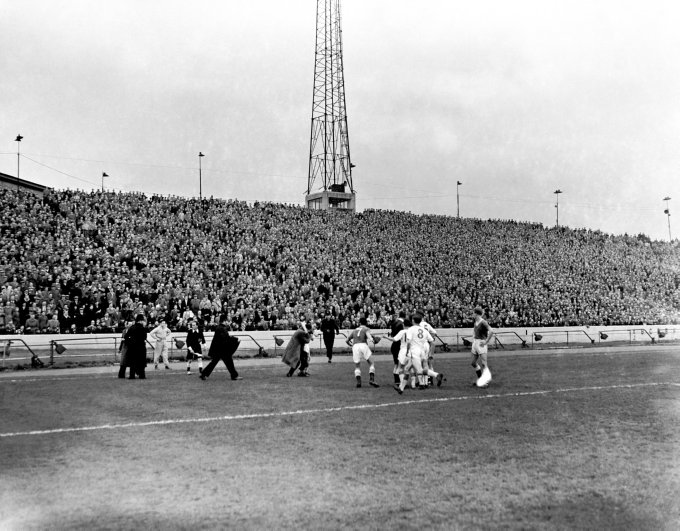 A pitch invader is dealt with by players during the game between Chelsea and Everton, 1959 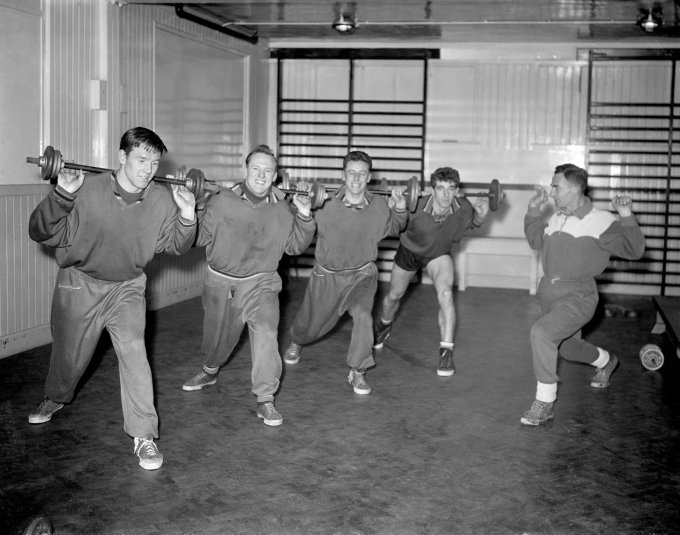 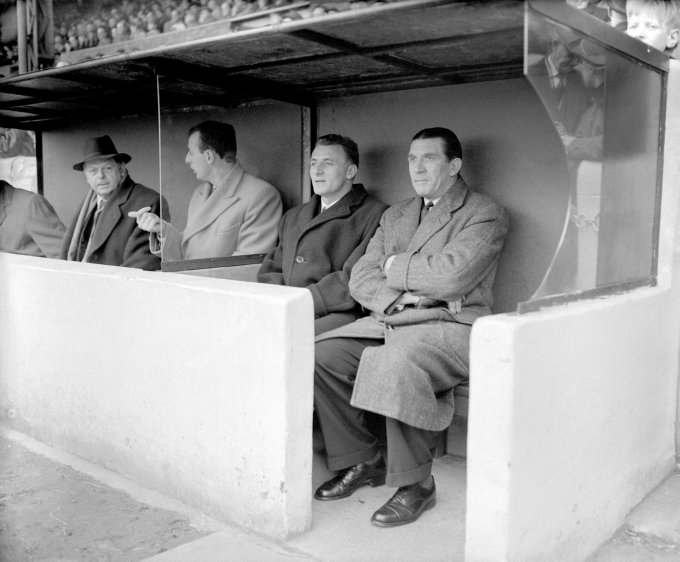 Chelsea manager Ted Drake (right) sits alongside his new player-coach Tommy Docherty in the Stamford Bridge dugout to watch his side take on Blackpool, 1961 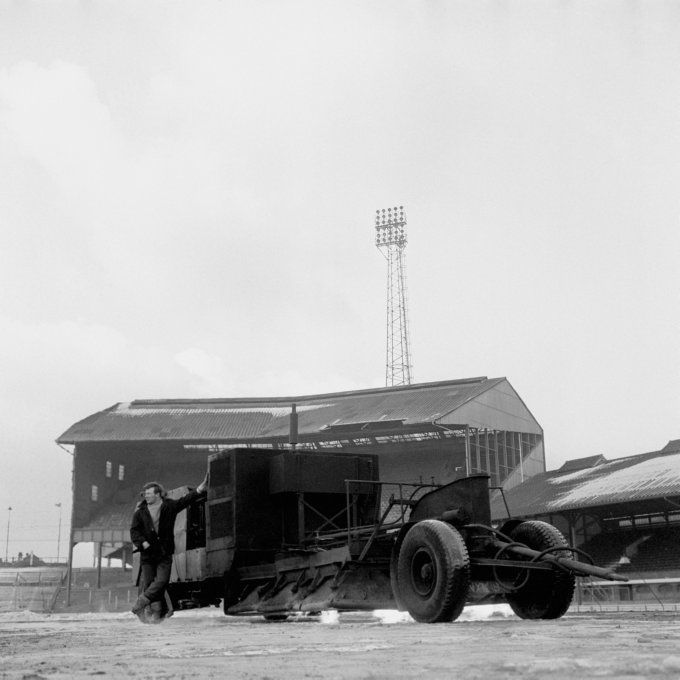 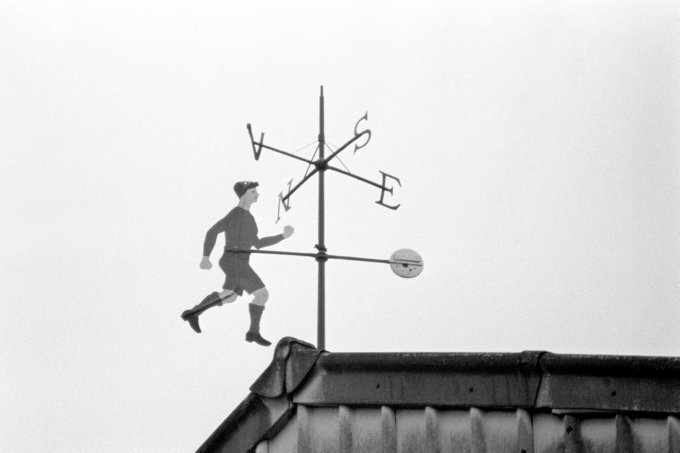 The weathervane atop Stamford Bridge’s east stand which was modeled on prolific striker George Hilsdon, who scored 98 goals in 150 league games for the club 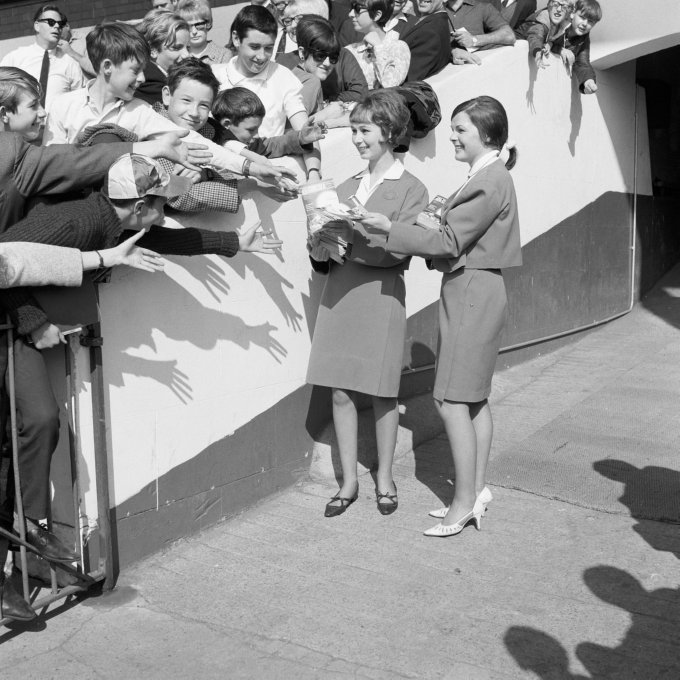 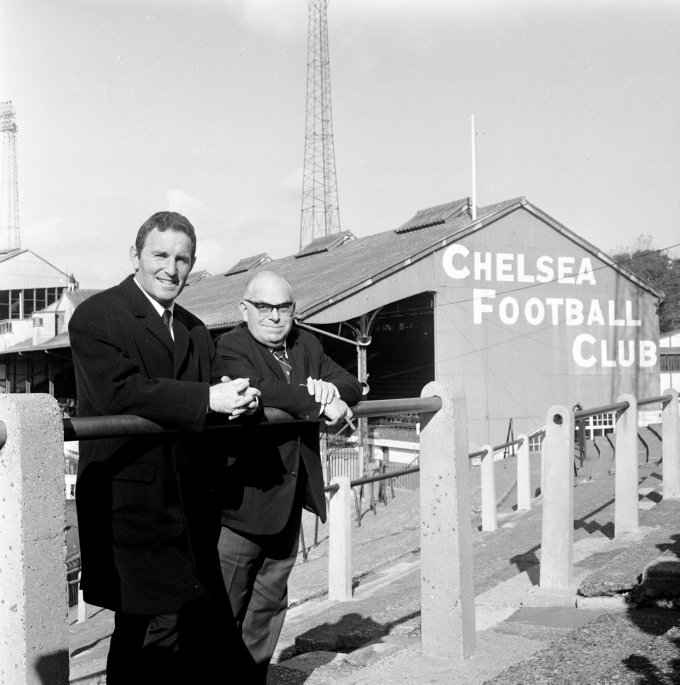 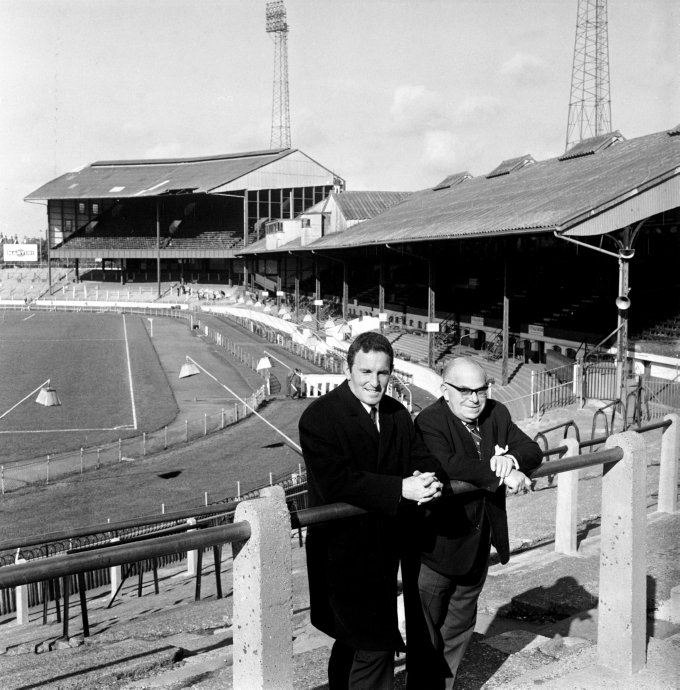