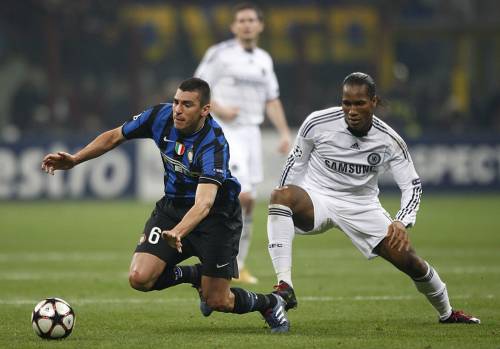 Inter’s Lucio on the receiving end of a Drogbanation

Inter Milan edged out Chelsea in a tight affair at the San Siro last night and will go in to the second leg with a slender 2-1 advantage. Goals from Diego Milito and Esteban Cambiasso were enough to win the tie for the Nerazzurri, but Chelsea managed to grab a precious away goal through Saloman Kalou‘s smart (but saveable) finish.

Julio Cesar Didn’t get down fast enough (perhaps a result of his automotive upset at the weekend?) to save Kalou’s effort, thus affording Chelsea what may turn out to be a fixture-deciding away goal, but otherwise a sturdy performance from the Brazilian stopper. 6

Maicon Didn’t really test Malouda’s defensive skills enough by raiding forward like the Maicon of old, but steadily became increasingly involved as the game went on. 6

Lucio A wonderful display from the Brazil centre back. Solid in the tackle and skillful in possession, he didn’t let the Chelsea strikers have a decent sniff of goal all night. Would have got a nine but for some woeful play-acting. 8.5 MAN OF THE MATCH

Samuel The type of no-nonsense defensive performance that we’ve come to expect from the Argentinian but he should have conceded a penalty for his tangle with Kalou. Could have also easily been punished for repeatedly clawing at Drogba’s shirt. 6.5

Zanetti Not as confident and assured as usual, but his reliability is never in question. Did, however, misplace and miscontrol a few simple passes. 6

Cambiasso Swept up well infront of his defence without fanfare all night. Took both his goal and the original blocked effort superbly well. 7

Thiago Motta Looked slightly superfluos in the Inter midfield and was overshadowed by Cambiasso. Taken off after an hour but still found time to kick Herr Ballack in the chops. 5

Stankovic I’ve literally got nothing in my notes about him. Worked hard but contributed little. 5

Sneijder Provided a fair amount of lively movement but nothing much of actual substance. Displayed a few nice touches here and there though. 6.5

Milito Scored a smartly taken early goal that was unfairly dismissed by Clive Tyldesley as ‘nothing clever’. Had Carvalho struggling to keep up with him for large periods of the game. Marked down for a shocking dive in the area during the first half. 7

Eto’o Poor by his high standards. Fluffed his only decent chance and looked uncomfortable when moved out into a wide left position. Replaced on the hour mark. 5

Balotelli Came on for the last thirty minutes. Pacey and powerful but unintelligent. I hate to say this but he reminded me a little bit of a young Marlon Harewood. A couple of mazy runs past Malouda but struggled on the wing. 6

Pandev Came on as a late substitute and that’s the last I saw of him. N/A

Muntari Came on as an even later substitute and that’s the last I saw of him too. N/A

Cech Beaten at his near post by Milito early on but had no chance with Cambiasso’s low strike. Taken off after an hour after suffering an innocuous, but seemingly very serious, knee injury. 6

Ivanovic Chelsea’s best player on the night. Looked ungainly going forward at first but eased into the game gradually. Bombed forward to set up Kalou’s goal and made some crucial blocks. 7.5

Carvalho Struggled to keep up with the movement of the Inter strike pairing, Milito in particular, but did a better job of it than his defensive partner. 6

Terry Got stood up by Milito during the run-up to the first goal. Failed to react to a dangerous low cross and had Eto’o to thank for sparing his blushes when the Cameroon striker wasted the chance. Looked decidedly distracted and (dare I say it?) uncommitted at times. 5

Malouda Deployed as an emergency left back and would have been exposed if Inter had fielded a decent out-and-out right winger. Did well when going forward. 6.5

Mikel Made some good interceptions early on but became increasingly ineffective as a protective force as the game went on. 5.5

Ballack Got a few bustling challenges in during the first half but that was about it. 5.5

Lampard Looked knackered and was possibly still lethargic after struggling with a virus at the weekend. Wasn’t that bad, just wasn’t that good either. 6

Anelka We got the standard flicks and clipped passes (plus a decent chance carved out for Lampard) but little else. Looked more and more uninterested as the game progressed. Should have come off instead of Kalou. 5

Kalou Full of running if nothing else. Showed some smart footwork but got frozen out by Lucio and Maicon too often. Took his goal well enough but his effort should never have beaten Julio Cesar. 7

Drogba Hit the bar with a fantastic freekick early on but was mainly frustrated from there on in. Had a host of half-decent efforts on goal but none really troubled the Inter keeper. 6.5

Hilario Came on for the injured Cech and had little to do in the half an hour or so he was on the pitch. 6

Sturridge Given a run-out for the final ten minutes but didn’t touch the ball as far as I know. N/A