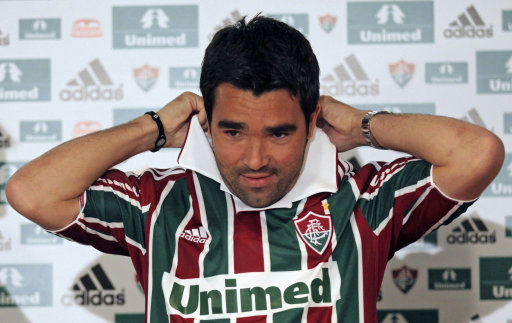 Deco has this afternoon been banned from football for an entire year by the Superior Court of Sports Justice (STJD) after being found guilty of doping offences – not that his sentence is going to hit him particularly hard, especially seeing as it comes roughly a month after the former Porto, Barcelona and Chelsea midfielder officially announced his retirement.

Whether the years/injuries had caught up with him or whether he merely jumped before he was pushed, Deco retired from the game at the tail end of August at the grand old age of 36, having spent the last three years of his career back in Brazil with Fluminense.

Deco was caught with trace amounts of various illegal elixirs and potions in his blood (his defence team claim it was caused by a vitamin tablet) following a game against Boavista in March and was subsequently banned for 30 days, though – as far as we can tell, though our Portuguese is a bit shonky – the prosecutors sought a retrial as the verdict was deemed too lenient.

The second case was then opened at the start of September (a week or so after Deco retired) though proceedings were suspended until today after new evidence supposedly came to light.

Seems the Brazilian justice system is about as swift as Deco was in his twilight years.