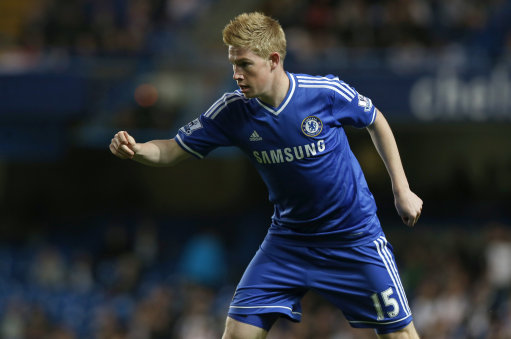 Safe to say it’s not exactly going to plan for Kevin de Bruyne at Chelsea so far with the news today that, having struggled to make anything approaching an impression at Stamford Bridge, the Belgian winger has been busted down to training with the club’s U21 side by Jose Mourinho.

The demotion is reportedly punishment for De Bruyne’s notably uninterested performance against Swindon in the League Cup last week, with several papers reporting that Mourinho axed him from Chelsea’s first-team squad for Saturday’s draw at Tottenham and their Champions League tie with Steaua Bucharest coming up on Tuesday night – apparently telling the 22-year-old that he’ll be playing with the reserves for the next three days at least.

To be fair, De Bruyne was the square-root of dismal against Swindon, looking for the most part like he’d rather be anywhere else than at the County Ground.

It looked like his confidence was in ribbons and it’s hard to see how a very public stripping by Mourinho is going to aid the situation.

While not quite the character assassination that some are labeling it, it appears that Jose is trying to break his players again in a bid to see which members of the squad are really willing to flog their lungs out for his cause.

Those who don’t toe the Mourinho line will be jettisoned off into space. Three months of moping then a January loan back to the Bundesliga is surely the only outcome here?