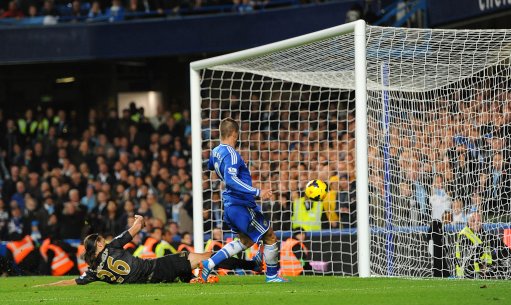 Sunday’s Oil Clasico was ultimately decided by yet another gaff from City ‘keeper Joe Hart. The error-prone England man got his wires crossed late on with Matija Nastasic, leaving Fernando Torres to slot home into an empty net.

Andre Schurrle had opened the scoring for the Blues on the half-hour mark after great work from Torres. Indeed, the Spaniard produced a performance which contained both superb play (including hitting the woodwork) and an awful miss but no-one can deny that, under Jose Mourinho, the former Liverpool man is improving significantly.

In the second-half, Sergio Aguero produced a magnificent effort which left Petr Cech rooted to the spot, leveling this battle of the two richest clubs in the Premier League. But just when it looked as though both sides would come away with a point, Hart rushed out of his goal just as Nastasic nodded the ball back towards goal, leaving Torres to clinch the winner.

Chelsea go second while City’s away form, not to mention Hart’s shaky form, will no doubt be of concern to Manuel Pellegrini.