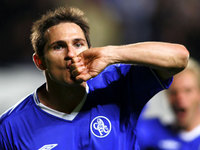 Frank Lampard has admitted it would be ‘a great experience’ to play for Barcelona, again prompting speculation that he could be set for a move to the Nou Camp in the summer. Lamps is yet to sign a new Chelsea contract and is known to be an admirer of the Spanish giants – there were even rumours (wholly unfounded, we add) that part of the reason he played badly at the 2006 World Cup because he was pissed off that a move to Barca had fallen through. And Eidur Gudjohnsen has apparently ‘spoken of the wonders’ of Barca to his former team-mate.
So would you miss him if he left? Who else are you gonna shout ‘You fat bastard!’ at when he’s goneâ€¦