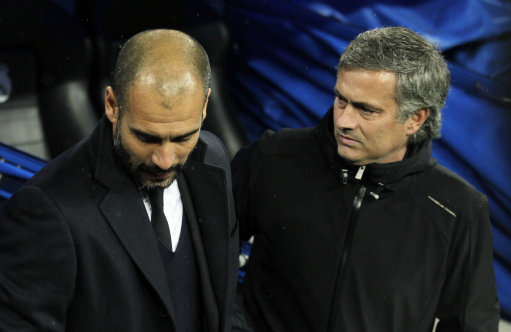 Whether he actually said it or not is up for debate, but Spanish paper El Confidencial (via Bild) are attributing a zinger of a quote to Jose Mourinho, who has apparently kept his ongoing feud with arch-nemesis Pep Guardiola simmering away nicely with a typically Mourinho-esque troll-heavy one-liner about the Bayern Munich coach’s lack of follicular fecundity.

“When you enjoy what you do, you don’t lose your hair, and Guardiola is bald. He doesn’t enjoy football.”

This comes after Pep and Jose got into a bitchy slanging match at the (thrilling) UEFA Elite Club Coaches Forum earlier in the week when the pair argued over the correct grass length.

Yep, you did read that correctly.

Guardiola argued that UEFA rules should be amended to whittle the maximum permitted grass length down from 3cm to 1.5cm in order to facilitate elite football, i.e, 100 passes-a-minute and lots of beautiful, beautiful possession retention.

Mourinho supposedly then quipped: “Everyone has his style of play, which should be respected. Football can be spectacular in several ways.”

To which Guardiola then reportedly replied: “The beauty of football depends on the coach. It seems to me that Mourinho prefers the result to the spectacle.

“I know to him that’s all that matters.”

“Ooooh, claws away you sassy BIIIIIITCHES!!!!”