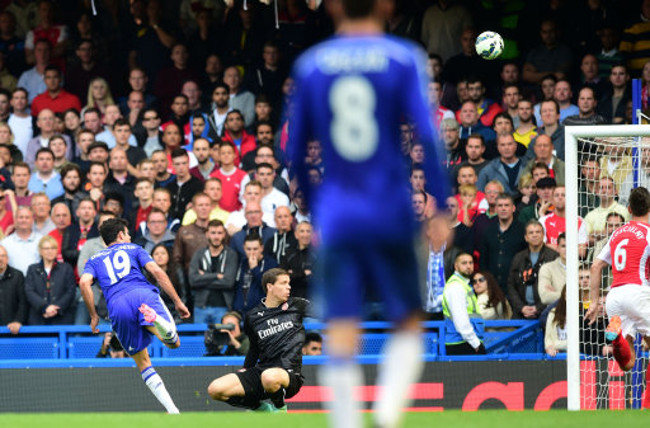 Jose Mourinho once again got the better of Arsene Wenger on Sunday, at least on the pitch if not off it.

Chelsea, as expected, were simply too good for the Gunners, who struggled to trouble Thibault Courtois and then Peter Cech (after Courtouis was subbed off with concussion) despite having long spells of possession

Eden Hazard was a thorn in the Gunners’ side all afternoon and it was the fleet-footed Belgian who won the hosts their penalty when he was fouled in the box by Laurent Koscielny. Hazard stepped up to convert the spot-kick himself and put the Blues a goal up.

Off the pitch, Wenger and Mourinho had a little ‘coming together’ but on the pitch after a hefty challenge by Gary Cahill on Alexis Sanchez which arguably should have seen the defender sent off.

After the break the Gunners increased the pressure but couldn’t unlock the Blues’ defence although they should have been awarded a penalty when Cesc Fabregas blocked a Jack Wilshere shot with his arms. And then, a magnificent pass from none other than Cesc Fabregas set up Diego Costa who deftly lobbed Wojciech Szczesny to seal the deal.

Overall, Chelsea were deserved winners while Wenger’s failure to adequately strengthen at both centre-half and defensive midfield this summer looks likely to leave his side well out of the title race.