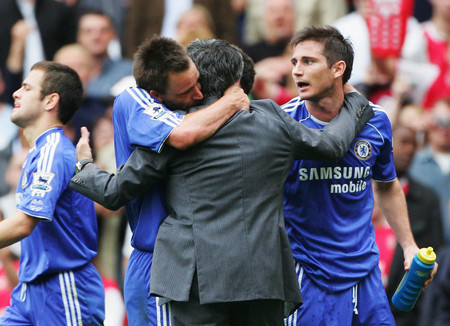 Yesterday’s crunch game at the Emirates was absorbing, if only to watch Chelsea’s grip on the Premiership title finally relax – they’ve been bravely hanging on with one hand to the edge of a cliff for several months now. A team with a lesser manager than Jose Mourinho would have capitulated long ago, so I give the Blues my respect for pushing Man Utd almost all the way. Goals were scored by Gilberto and Essien (what a wonderful cross by SWP).
Arsenal’s fans seemed happy enough that they had prevented Chelsea from winning the title, but that’s a small crumb of comfort to take from a poor season. The Arse had a great chance to beat Chelsea yesterday but couldn’t even do that against 10 men at home, so if I was a Gooner I wouldn’t take too much delight in Chelsea losing their crown. Okay, just a bit maybe.
Click below to watch Mourinho’s remarkable reaction to the final whistleâ€¦

You can totally see why Chelsea’s players love Jose and love playing for him. He’s the sort of manager who inspires loyalty through his actions.
[Photo: Getty Images]