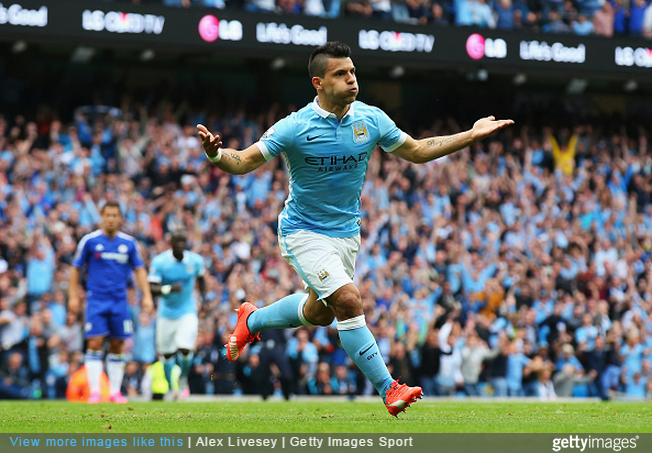 The Citizens started superbly, with Sergio Aguero failing to make the most of a one-on-one situation with Asmir Begovic, almost straight from the kick-off. The Bosnian, in for Thibaut Courtois, was Chelsea’s one and only star man, keeping out Aguero and co. time and time again.

Chelsea struggled to match their hosts and eventually, on the half-hour mark, the goal came for the Citizens, with Aguero cleverly wrong-footing Gary Cahill before firing home.

#MCFC 1-0 #CFC Aguero gets his first goal with his first start. Can City down the 14/15 champs? Courtesy: SkySports pic.twitter.com/cLVjG4fLWc

Cesc Fabregas and Nemanja Matic in the Blues’ midfield were outfought by Fernandinho and Yaya Toure throughout the game, with City quicker to every ball.

At the break Jose Mourinho subbed off captain John Terry for the first time in the Premier League, with Kurt Zouma sent on to tighten things up.

However, despite an improvement from the visitors in the second period, they were still very much second-best. Then, on 79 minutes, the hosts netted a deserved second, with Vincent Kompany heading home a David Silva corner.

Things then went from bad to worse for Chelsea, with Fernandinho crowning a superb individual display with a rocket-shot goal late on.

Mourinho may have described the 3-0 win for City as a “fake result” but with just one point from his opening two games, and the Eva Carneiro controversy continuing to muddy the waters at Stamford Bridge, the Portuguese manager has much work to do. As for Manuel Pellegrini, he’ll no doubt be delighted by a performance full of energy and invention from his hungry-looking charges.