In his 100th Premier League home game, Jose Mourinho suffered only second home league defeat with Chelsea, courtesy of a shock 2-1 win at the hands of a vibrant Crystal Palace side. 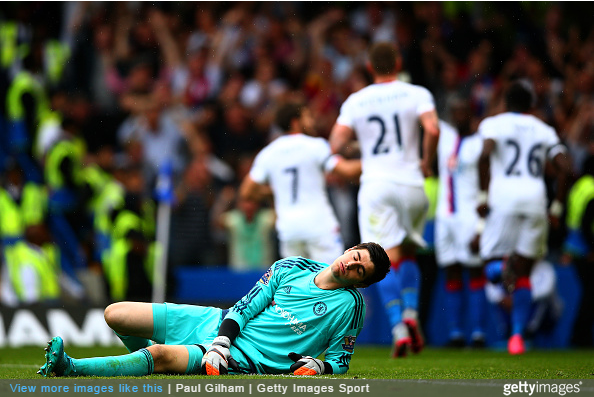 The home side were the better side in the first period, with Eagles’ ‘keeper Alex McCarthy saving well from both Diego Costa and Cesc Fabregas.

Kurt Zouma, in for the suspended John Terry, had a penalty claim dismissed by ref Craig Pawson as the visitors worked hard to contain the Premier League champions.

In the second-period, Palace continued to be a threat on the counter and not long after the hour-mark, they went ahead when Bakary Sako fired in from a  Yannick Bolasie centre.

Chelsea hit back within 15 minutes, with sub Falcao heading home his maiden Blues’ goal after a good cross from Pedro

However, just minutes later on 81 minutes, Joel Ward headed home the winner after a cut-back from Sakho.

The result sees Chelsea with just four points from their first four games as question marks remain over the uncharacteristically shaky-looking Blues’ backline. As for Eagles’ boss Alan Pardew, his exciting brand of expansive, attacking football continues to reap rewards for the south Londoners.