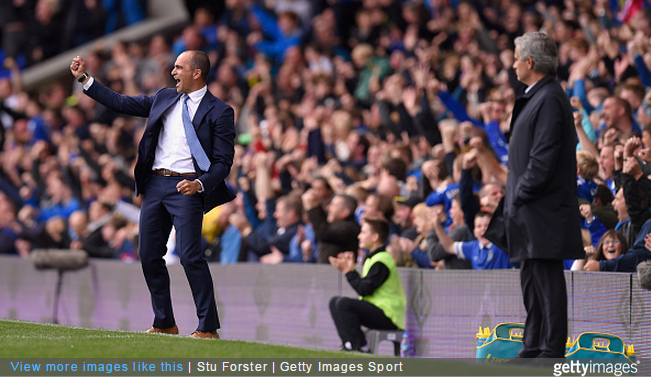 While you may have seen it reported by the national press as a “sweary meltdown“, it would appear that Jose Mourinho’s supposed “furious bust-up”  with Roberto Martinez after Everton’s 3-1 win over Chelsea on Saturday has been – shock horror – blown out of all proportion.

The audio of the “X-rated rant” has since surfaced and, surprise surprise, it’s all really rather tame.

It all kicked off while Martinez was busy giving a post-match interview. Mourinho then butted in to complain about not going first as Chelsea had a long trip back to London to make.

Mourinho can be heard interjecting: “Roberto – next time tell me to go before you, because we have to travel.”

Martinez then tells Mourinho he has no control over the order of the interviews, to which the Chelsea boss responds “F**king hell” before clomping off up the tunnel.

Sounds like a brief moment of foul-mouthed exasperation to us. Mourinho’s expletive wasn’t even directed personally at Martinez.

Sadly, “Chelsea manager swears under his breath because he wants to go home” doesn’t quite have the same bombastic ring to it, now does it?