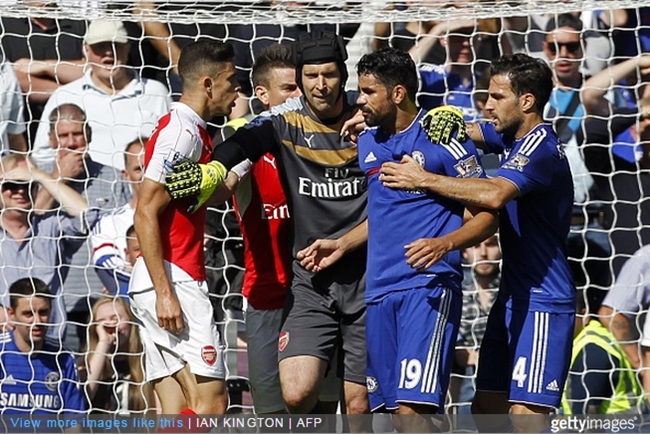 A handshake between Jose Mourinho and Arsene Wenger, albeit one lacking much warmth, preceded a London derby which was anything but amicable, with two red cards for the Gunners helping Chelsea on their way to a much-needed Premier League win. 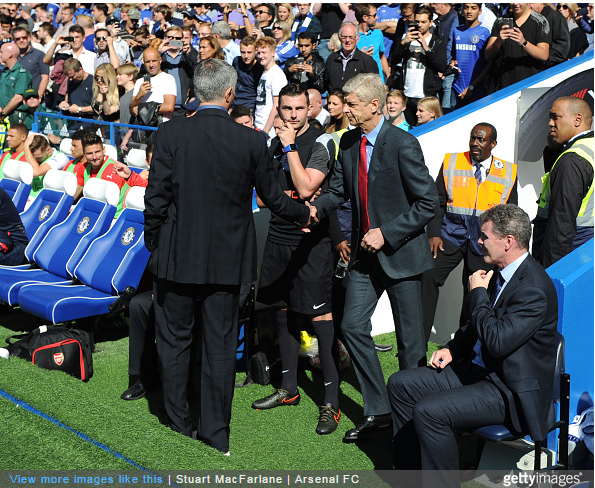 The hosts started brightly, with Diego Costa a threat up front.

On the half-hour mark, Chelsea wanted a penalty after Eden Hazard went down under a challenge in the box. However, ref Mike Dean dismissed the claims.

The game erupted just before the break, with defender Gabriel seeing red for an apparent stamp on Diego Costa. The incident occured after the Spanish striker had clashed with Laurent Kosielny…

However, despite putting his hands into Koscielny’s face, Costa escaped caution while a retaliating Gabriel saw red for some sort of stamp on the Spanish international…

What Gabriel did. He stopped walking. Yep. Gabriel got sent off for that. pic.twitter.com/K358Z09lgn — Moe (@FootyHipstar) September 19, 2015

Arsene Wenger sent on Calum Chambers for Francis Coquelin at the break, with the former Southampton man also ending up in Dean’s little black book, after a foul on Hazard.

However, the hosts didn’t take long to make the most of their one-man advantage, with an un-marked Kurt Zouma heading home from a floated Cesc Fabregas free-kick.

On the hour-mark, Alexis Sanchez just failed to connect properly with a high ball into the box as the Gunners looked to get themselves back into the game.

With 15 minutes to go, Wenger sent on Olivier Giroud and Alex Oxlade-Chamberlain for Alexis Sanchez and Mesut Ozil in a last throw of the dice.

But any hopes the Gunners had of getting something out of the game were extinguished when Santi Cazorla was sent off for a second yellow, courtesy of a late tackle on Cesc Fabregas.

That challenge was only the Arsenal man’s second foul of the game.

After yet another tangle, this time with Oxlade-Chamberlain, Costa was finally off. But not courtesy of a red card but instead to be replaced by Loic Remy. However, the second goal eventually came for the Blues, with Hazard’s effort deflecting in off Chambers.

The win sees Chelsea kickstart their domestic season while once again Wenger fails to get the better of Jose Mourinho in the league. But the real talking point is the behaviour of Diego Costa, who once again has gone unpunished despite another masterclass in s***housing. Bizarre.