Despite seeing his three-match ban following that infamous red card at Stamford Bridge chalked off, Arsenal centre-half Gabriel has, somewhat ironically, now been given a one-match ban by the FA for his behaviour after the sending-off following his altercation with Chelsea’s Diego Costa.

The Brazilian admitted the FA charge of ‘improper conduct’ and will now serve a one-match ban and cough up £10,000 for failing for leave the pitch after Mike Dean brandished a red card. The ban means the 24-year-old will miss the Gunners’ clash with Leicester this weekend.

Here’s the FA statement in full… 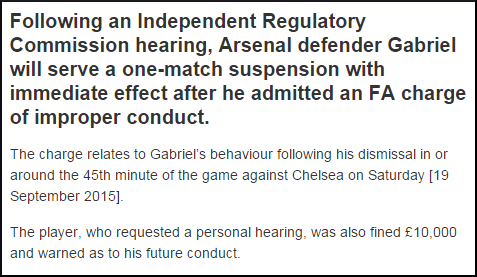 So basically, in the last few days the FA have admitted that the sending-off was wrong but that Gabriel still needed to be punished for his reaction to that erroneous red card? At least hopefully that’ll be the end of the matter now!