While the Chelsea men’s team might be experiencing a dismal run of form, the clubs’s ladies’ side have enjoyed a superb 2015 Women’s Super League campaign, culminating in the west Londoners lifting the title on Sunday after hammering Sunderland Ladies 4-0. 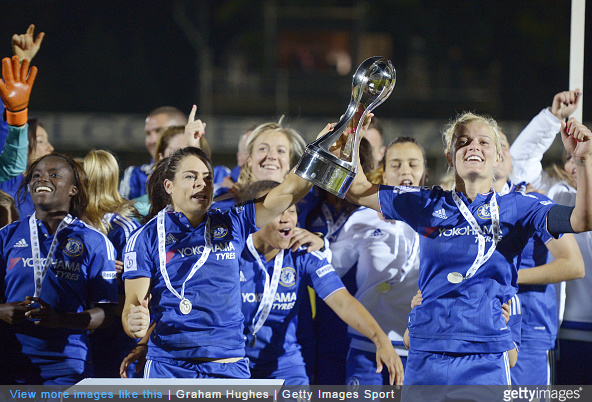 Ahead of the final WSL matchday, the Blues were two points ahead of title-chasers Manchester City, with a win against the Lady Black Cats guaranteeing the west Londoners their first WSL title. And courtesy a brace from England striker Fran Kirby, coming between goals from Ji So-Yun and Gemma Davison, the victory and the title were theirs.

The title win will be all the more sweet for Chelsea considering they are the only side in the top-tier with a female coach, with Emma Hayes leading the side to glory in her fourth year with the club.

Men’s team captain John Terry, a long-time supporter of the Chelsea women’s team, was at Wheatsheaf Park to witness the historic win, although rather disappointingly he didn’t change into the Chelsea strip for the celebrations.

Elsewhere, runner’s-up Manchester City Women secured their berth in next season’s Champions League courtesy of a 2-1 home win against Notts County Ladies while Bristol Academy drop down to WSL 2.

The 2015 season, boosted by England’s performance in the World Cup, has seen the women’s game grow massively. Here’s hoping to an even bigger and better WSL 2016. Well done Chelsea and well done Emma Hayes!