Chelsea’s nightmare season shows no sign of improving after the Blues went down 2-1 at the Boleyn Ground in a game which saw Nemanja Matic sent off and Jose Mourinho sent to the stands. 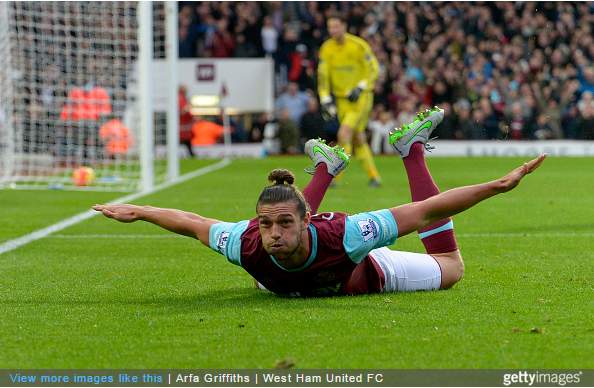 Mauro Zarate put the Hammers ahead after just 17 minutes, firing home after the Blues failed to clear Dmitri Payet’s corner.

Chelsea thought they had equalised when Kurt Zouma headed Cesc Fabregas’ corner goalwards, only for the goalline technology to show that the Frenchman’s effort failed to completely cross the line, albiet by the thinnest of margins.

Cesc Fabregas then had a goal chalked off for offside as the Premier League champions looked to get back on level terms.

However, just before the break, things went from bad to worse for the Blues, when Nemanja Matic was shown a sewcond yellow for fouling Diafra Sakho.

The incident also saw Fabregas and Diego Costa booked for complaining while Chelsea assistant coach Silvino Louro was sent from the bench.

For the second-half, Mourinho was sent to the stands after speaking with referee Jon Moss at the break.

However, the Blues got themselves level on 56 minutes, with Gary Cahill scoring after a Willian corner.

Hammers’ boss Slaveb Bilic sent on fit again Andy Carroll to find a winner for the hosts, and the former Liverpool hitman did just that on 79 minutes, towering above Cesar Azpilicueta to head home from an Aaron Cresswell centre.

10-man Chelsea ultimately couldn’t find another equaliser, with the game ending in a deserved victory for West Ham.

The result saw the Hammers go third, at least before Arsenal played Everton, while Chelsea drop to 15th as their nightmare season goes on.