Danny Dyer, the Dick van Dyke of the 21st Century, was up to his old cheeky chappiness at the Boleyn Ground on Saturday, during West Ham’s 2-1 win against Chelsea.

The gobshite geezer, who is rumoured to have more rabbit than Sainsbury’s, managed to catch a downbeat-looking Jose Mourinho on camera, after the Blues’ boss had been sent to the stands. 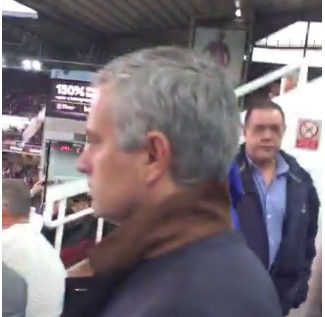 Returning to the posh seats after the half-time break, the Eastenders actor walked past Mourinho, who been banished from the touchline by ref Jon Moss.

Filming his brush with Specialness (which he posted on Twitter), Dyer also caught another West Ham fan giving Mourinho a two-fingered salute behind his back. All very silly.

I wonder what the Chelsea press officer will say about this latest smartphone video intrusion?