Chelsea’s horror start to the 2015/16 season rolls on, with the Blues dumped out of the Capital One Cup on penalties by Stoke on Tuesday night. 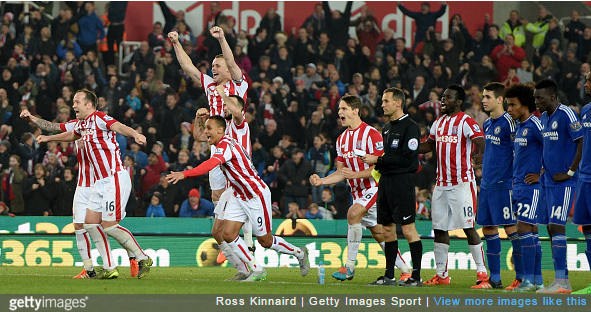 Jose Mourinho put out a very strong 11 against the Potters, with Baba Rahman in for Cesar Azpilicueta at left-back. The visitors dominated the first-period, with Stoke ‘keeper Jack Butland forced into a number of fine saves, including a couple from Diego Costa.

The Blues were dealt a blow on the half-hour mark, when Costa went off injured, with Loic Remy replacing the striker.

However, while the Blues dominated proceedings in the first-half, they couldn’t turn their possession into goals.

After the break, it was Stoke who would open the scoring, with Jonathan Walters turning on the edge of the box before scoring via the crossbar.

The west Londoners pushed for an equaliser but it took until injury time for the goal to finally come, with Remy firing home after Kurt Zouma flicked on a Willian corner.

However, despite having a man extra in extra-time, the Blues couldn’t find a way past Butland, who denied youngster Kenedy.

After a goalless 30 minutes of extra-time, a tense penalty shoot-out saw both sides’ first four spot-kicks converted before Marko Arnautovic made it 5-4 to the Potters. The pressure fell on Eden Hazard to net his penalty, only for the Belgian wingman to see his effort saved by Butland. And that was that.

While Mark Hughes and co. squeeze into the quarter-finals of the competition, the pressure will no doubt grow on Jose Mourinho as his campaign goes from bad to worse. However, on the other hand, the Blues played well for long periods of the game at the Britannia, which bodes well for at least the near future, whether or not Mourinho himself is still in charge.