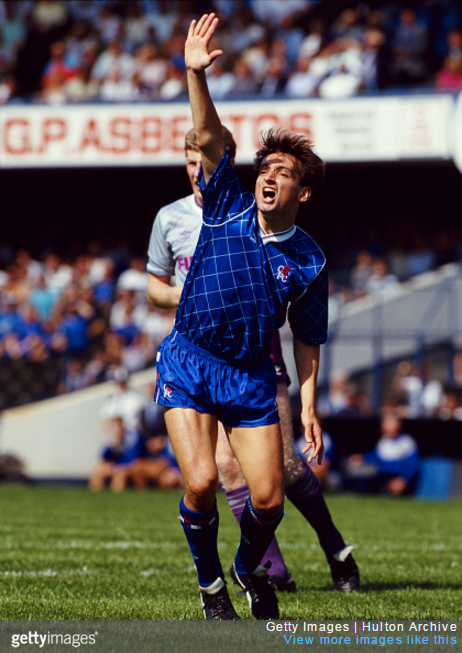 On this very day in 1987, sixth-placed Chelsea traipsed to the home of First Division league leaders Arsenal for a game that would prove fateful, and not in a good way.

Indeed, the Gunners proceeded to win 3-1, and the defeat duly triggered a run of 21 league matches without a win for Chelsea – a dismal club record that still stands.

The Chelsea line-up featured Tony Dorigo, Gordon Durie and Pat Nevin (pictured above). Nevin got on the scoresheet, as did his teammate Roy Wegerle – though unfortunately the American midfielder plonked the ball in his own net to add to two Kevin Richardson goals…

Chelsea would not win for another 20 games, a long-overdue victory against Derby County the following April (1988) breaking the run.

However, that was to be the Blues’ last win of the season, and the west London side eventually went down after losing the play-off final to Middlesbrough, gaining another unwelcome record in the process: they were the first top flight club in 90 years to be relegated via the play-off system.

Anyway, as previously mentioned, Chelsea’s run of 21 winless matches is a record that still stands to this very day – that’s at least four managers in today’s money.