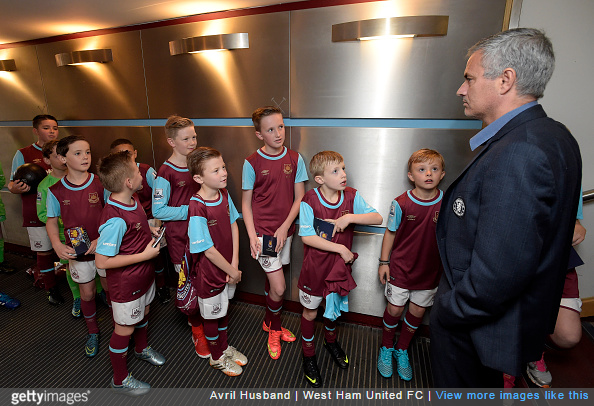 With wins/half-way convincing performances hard to come by and FA fines stacking up, we think it’s fair to say that things really aren’t going Jose Mourinho’s way at the moment.

Things started really boiling over during Chelsea’s tetchy 2-1 defeat at West Ham last Saturday, with a small boy apparently responsible for sowing the first seed of discontent in the Upton Park tunnel.

According to former West Ham winger Stuart Slater, who was present at the match, Mourinho made a bet with one of the Hammers mascots just shortly before kick-off.

Recounting the moment on the Knees Up Mother Brown podcast, Slater said:

“Before the game Mourinho was talking to the ball boys and mascots and one of the mascots said to him ‘we’re going to beat you!”

“When he returned from the warm-up, he came back into the tunnel and asked which one of the mascots said West Ham were going to beat Chelsea – one of the boys put his hand up and said ‘it was me!'”

Mourinho apparently told him: “If we win I’ll have your shirt – and if you win, I’ll get you a signed Chelsea shirt.”

“Whether it happened or not, I don’t know – but it was brilliant that he could have a little bit of banter before the game,” Slater added.

Ordinarily we’d hope that Mourinho had the good grace and gumption to uphold his end of the wager, but let’s face it – nobody wants a signed Chelsea shirt at the moment.