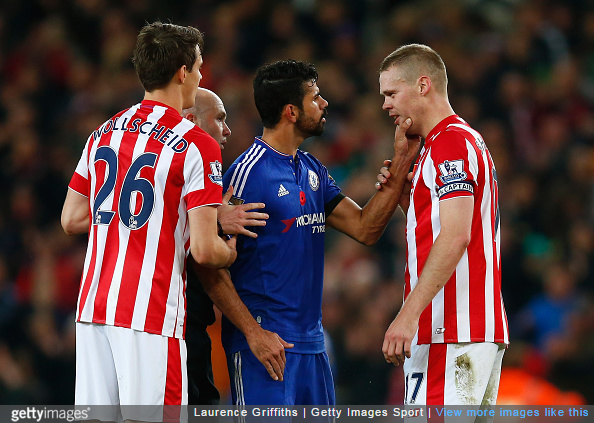 After freeing himself from the burden of having to score goals, Diego Costa is currently in full-on ‘little bugger’ mode at Chelsea, focusing mainly on riling opposing defenders than actually contributing anything meaningful to his own team’s cause.

Indeed, Costa spent his evening attempting to goad Ryan Shawcross during Chelsea’s 1-0 defeat at Stoke on Saturday, even resorting to a frankly embarrassing playground charade that saw the striker calling his marker’s personal hygiene into question following a brief physical altercation.

Yes. A grown man of 26 actually waved his hand in front of his nose after pointing to another man’s armpits. It was pathetic.

Shawcross didn’t react to the childish bait at the time, but his wife duly posted a pithy response to Costa’s insinuations on Twitter after the match…

Made sure @Ryanshawy put his deodorant on this evening 🙈🙈🙈 pic.twitter.com/AyJfMi6BmG